And Your Opening Night Roster Is... Um, We Don't Know Either

Share All sharing options for: And Your Opening Night Roster Is... Um, We Don't Know Either

I'm pretty sure in a couple of days Joe Ike's voice will boom inside the Tank, "And now, let's meet your San Jose Sharks -- right after someone makes up their mind who they are."  Which hasn't happened yet.

As best I can decipher it, math is not the Sharks strong suit.  A NHL team during the regular season has a 23 man roster.  The roster does not include players on injured reserve, so for a couple of months Torrey Mitchell need not be considered.

Now, bear in mind Kyle McLaren technically is still on the roster if no one claims him off of waivers, but should he not be claimed by tomorrow when his twenty-four hours on waivers is up he will either be cut or asked to hang out with the kids at Worchester so his salary won't count against the cap.  The NHLPA would go bat guano crazy were the team to attempt talking him into re-negotiating his contract at a lower salary, so scratch that off the list of possibilities.  However it plays out, he's gone.

Also bear in mind the Sharks put Riley Armstrong and Brad Staubitz on waivers today in the hope no one claims them so they can be sent to Worchester.  Why weren't they simply sent there?  Couldn't be.  They've been up and down the maximum amount of times allowed.  So regardless of whether someone claims either or both of them they're gone.

And now, the math part.  In order to avoid the same mistake the Sharks seem to be making, let's get some professional help with this (all right, I heard that "you've needed professional help for years" comment out there): 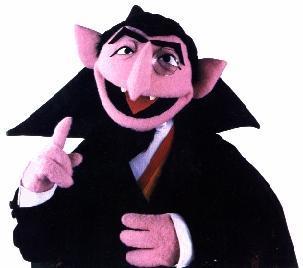 (dramatic flash of lightning -- no, not Tampa Bay -- and crash of thunder)

(repeat dramatic flash of lightning -- no, still not Tampa Bay -- and crash of thunder)

(yeah yeah we know... dramatic flash of lightning, blah blah blah.  Get a new shtick already, will you?  Even the four year olds are getting tired of this one.)

Now, Lukas Kaspar is still in town.  As is Jeff Friesen.

So doesn't that equal twenty-three?

Then why does the Sharks Web site have the following:

There are a couple of situations that are still in play with regards to the roster. Jeff Friesen remains in camp as a tryout player and has obviously made an impression. At this point, he would be the 24th rostered player and that simply cannot occur.

If Friesen were to be eligible for opening night, he would have to beat out a player like Lukas Kaspar or Tomas Plihal. Kaspar though has played very well himself. The Sharks have not placed Mitchell on the long-term injury list, meaning they could still possibly see some financial relief.

Either way, the Sharks should have the lineup set quickly as Wilson doesn’t plan to let Friesen’s situation play out too long.

“The only player we still have the luxury of time with is Friesen,” said Wilson. “He is not under contract. We’ll wait for the injury updates. We want to see how Marcel (Goc) is. Lukas Kaspar had a heck of a camp. There are four guys competing for two spots. It will be sooner rather than later.”

When the lineup takes to the HP Pavilion ice on Friday, it will be who Todd McLellan wants to see.

Friesen will continue to do what he can control and hope for the best.

“I’m focused on hockey,” said Friesen. “I’m still here, but they haven’t made any decisions. It’s as simple as that.”

So am I missing something, as in someone, here?

The talk is even with McLaren subtracted from the mix the Sharks have salary cap issues.  Grabbing the numbers from the NHLPA site, including Kaspar but not Mitchell (who's listed at $715,000) since as long as he's on IR his salary doesn't apply against the cap the Sharks have $53,181,667 on the books for this year.  The cap is $56,700,000.  So again I ask: other than my mind, what am I missing here?  I'm not seeing the problems.

If I'm off on either the number of players or the team salary, feel free to let me know.  In the meanwhile, back to waiting for opening night.

P.S.  Forgot to mention Goc is having back issues, so his status for the forseeable future is unknown.