If there was ever a gameday post chock-full of bad karma, this has to take the cake.

The Sharks bring a 9-0-0 home record into the tilt, and it's safe to say HP Pavilion has been an unhinged beast for opposing teams this season. In fact, tonight holds special significance due to the fact that Patty & Co. will be looking to become the first team since the 1963-64' Blackhawks (and only the second overall) to string off ten home wins in a row at the beginning of a season.

There's not a team more fitting to fly into San Jose tonight than the Nashville Predators. Oh how I love the proverbial whipping boy of postseason's past.

Nashville boasts their usual roster of hard-working personnel, a team that makes up for their lack in skill by doing the little things right under the tutelage of Head Coach Barry Trotz. Jason Arnott just may be the most underrated Captain in today's NHL; coupled with young defenceman Shea Weber (who is having a monster year thus far with seven goals and seven assists), Nashville has the pieces to finagle their way into a lower seed playoff berth. Those lil hellions always seem to find a way, eh?

Tonight will be a good test for the Sharks coming off a lackluster effort in Phoenix. You can make a case San Jose hasn't played a solid period of hockey in 80 minutes (the final twenty against Dallas, along with the entire Phoenix game), but that case gets closed when we're at The Tank. Bad karma posts be damned. Tonight the Sharks turn the Predators into prey. 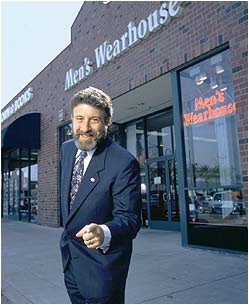 Prediction: Sharks win 4-1. Goals by Patty (x2), Pavelski, and Ehrhoff. Men's Warehouse immediately offers me a job after the game; I get the ax two days later for constantly predicting the number of times George Zimmer looks in the mirror each morning and doesn't like way he looks. Turns out it's three.