SHARKS MAKE HISTORY - And find it brushed aside by Dan Ellis

Share All sharing options for: SHARKS MAKE HISTORY - And find it brushed aside by Dan Ellis 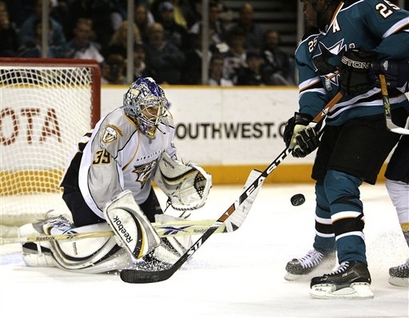 With the chance to make history twice in a single night, the San Jose Sharks captured it once – and lost the game.

The Sharks, who came into tonight’s matchup against the visiting Nashville Predators (6-7-1) with the league’s best record (13-3-0), had the opportunity to become the first team since the end of the Original Six era to go up 10-0-0 at home.  They also had the chance to shatter the franchise record for most shots on goal at home (49).

Fortunately for the Sharks, a shoddy Nashville defense coupled with a Todd McLellan-inspired offense allowed the latter to happen quite handily.

Unfortunately for the Sharks, a certain Predator goaltender named Dan Ellis stood in the way – literally – of the former.

If only shots on goal equaled actual goals.

Ellis – recently signed to a $3.5 million two-year deal following his mind-boggling 225 saves against Detroit in the 2008 quarterfinals – made good on his millions by stopping an astonishing 52 shots on goal in regulation.  He would finish the evening by stopping a total of 54 shots - a career best -  for a .947 save percentage, en route to a come-from-behind Nashville victory in overtime.

It took San Jose a while to crack Ellis, considering that they were outshooting Nashville 8 to 1 at just over 7 minutes into the game.

Actually, San Jose appeared to finally bust through Ellis’ stonewall during a 4-on-3 power play.  Joe Thornton got the puck through Ellis milliseconds after a premature whistle stopped play.  However, referee Dave Jackson waved the goal off, to the ire of the home crowd.

The Sharks kept up the pressure with strong opportunities – at one point the shots on goal were 14 to 2 in favor of San Jose.  One such opportunity - Brad Staubitz, playing for the injured Jonathan Cheechoo, had a great shot (San Jose’s 16th), only to have it dramatically saved by Dan Ellis.

Finally, at 16:52 of the first period, Devin Setoguchi put the Sharks on the board with the 19th shot on goal, for his 8th goal of the season (trailing only Ryane Clowe on the Sharks).  Patrick Marleau, under pressure from Dan Hamhuis, managed to pass the puck to Brad Lukowich, who immediately fed it to Setoguchi, who hit it past Ellis.

Setoguchi was not done for the period, as he had a chance to make it 2-0 San Jose, but was stopped by a snow-showered Ellis.

At the end of the first period, San Jose outshot Nashville 21 to 6.  That is not a misprint.

Nashville coach Barry Trotz evidently schooled his players during the intermission, because they roared back with 4 shots on goal in 2 minutes, and gave San Jose a reasonable scare at Brian Boucher’s net.  Fortunately, Douglas Murray fished it out from the side and play continued.

Marc-Edouard Vlasic then had a wide open opportunity, but Ellis once again made a nice save as the net came loose.  Not long after, Jody Shelley and Jeremy Roenick had two quick, and unfortunately ineffectual, shots on goal.  Shea Weber earned the appreciation of Sharks fans by giving up a nasty turnover to Joe Pavelski, but nothing came of the latter’s opportunity.

Nashville survived a Ryan Suter tripping penalty with the inadvertent help of Rob Blake – who was called for interference, making it a 4-on-4.  While shorthanded after Suter’s penalty expired, Marcel Goc made a nice rush, only to be (surprise) stopped by Ellis.  Mike Grier grabbed the rebound, and once again – nothing came of his opportunity.

The Sharks began to play more physically – Christian Ehrhoff and Milan Michalek shoved Rich Peverley in front of Boucher’s net.  This incident was followed by a big hit by Alexei Semenov on J.P. Dumont.

The aforementioned Peverley was called for hooking, and the Sharks took advantage on the power play.  Ellis was once again stellar, but after making two (perhaps three) brisk – and amazing – saves off of Joe Thornton and Devin Setoguchi, the final rebound went towards Rob Blake, who chipped it in past the spread-eagle Nashville goaltender.  The Sharks now led 2-0, courtesy of the 43rd shot on goal.

Regarding shots on goal – the Sharks had 43 shots against the St. Louis Blues last Thursday, after 65 minutes of play.  The Sharks had put up the same amount after just under 37 minutes of tonight’s game.

Unfortunately for the Sharks, Brian Boucher *pulled a Turco* and decided not to cover up the puck with Jason Arnott approaching.  After playing the puck to the side, Arnott took full advantage, cutting San Jose’s lead in half for Nashville’s first goal of the night (on their 15th shot on goal).

The third period began with dual wrap-around attempts by members of each team.  First, Vernon Fiddler from Nashville found his attempt blocked by Boucher.  Shortly thereafter, across the ice, Devin Setoguchi found his chance blocked by Ellis.  Elsewhere, Jordin Tootoo avenged J.P. Dumont by hitting Alexei Semenov.  Back in the Predators’ end, Dan Ellis had what can only be described as a wardrobe malfunction…

…Which preceded a Sharks malfunction.  Marcel Goc was completely ineffectual in stopping a high deflected puck from getting onto the stick of Vernon Fiddler, who tied the game 2-2 at 5:42, on the Predators’ 21st shot on goal.  Goc seemed to be unaware of the puck’s location, and had an opportunity to stop Fiddler from reaching it, which he squandered.  Christian Ehrhoff was likewise unable to stop Fiddler from blasting it into the goal.

Not all was lost for Team Teal, however.  Devin Setoguchi notched his second of the evening just 27 seconds later, after being set up by Joe Thornton from behind Nashville’s net.  His goal came on the 47th shot, and allowed him to tie Ryane Clowe for the most goals by a Sharks this season.  San Jose now led 3-2.

The fun continued, as Nashville defenseman Ville Koistinen was called for hooking at 9:22.  The ensuing San Jose power play was horrific – assuming one’s perspective is not biased towards the Predators.  San Jose repeatedly turned the puck over to Nashville, who lost no time in dumping it far from danger across the ice.

After successfully killing off the penalty, Nashville went on a power play of its own, as Tomas Plihal was called for hooking.  Inexplicably, the aforementioned Koistinen passed the puck from the point BACK TO ELLIS, who apparently blessed it with his mojo before sending it on its merry way back up the ice – and eventually to the back of the Sharks’ net, at the hands of Ryan Suter.

Suter scored the game-tying goal just one second after the Sharks "killed" the penalty.  The saddest part of the Predators’ goal is that Brian Boucher’s incredible, jaw-dropping, diving stick save immediately preceded it – and will not go down in highlight reel infamy.  Had there been a Sharks player in position to knock the puck out of danger after the rebound, Suter would not have been able to notch his second goal of the year, and San Jose denizens would be singing the praises of Brian Boucher for weeks to come.

Honestly –a save as magnificent as the one described above is rare indeed.  Track it down on YouTube.  It deserves more attention than it will receive, in light of the overshadowing Suter goal.

History – but not the most important kind

The San Jose Sharks broke the franchise shots on goal record for a home game with 5:51 left in regulation, with their 50th shot on goal, courtesy of either Devin Setoguchi or Patrick Marleau (it was the #1 line, and not Joe Thornton).  They would finish the 60 minutes of regulation with 55 shots on goal, to Nashville’s 26.

Despite the lopsided shots on goal ratio, the Sharks were frustratingly even with the Predators where it mattered the most – on the scoreboard.

Two minutes and 28 seconds into overtime, Ville Koistinen ended the hopes and dreams of the Sharks and their fans with his second goal of the year, which also snapped Nashville’s recent losing streak.

The reality of the situation quickly set in on even the most stat-phobic Sharks fan in attendance – Team Teal had 57 shots on goal, to Nashville’s 29, and LOST the game, to say nothing of the chance at making modern NHL history.

While the Shark fan in all of us should be happy that Devin Setoguchi earned the first star of the evening, it was very clearly the third star Dan Ellis’ finest hour in his very young career.

The San Jose Sharks, who managed at least a point for the evening, still lead the NHL in points, at 27.  They faceoff against the visiting Calgary Flames this Thursday, before heading out to Chicago and (surprise) Nashville for back-to-back games beginning Sunday.

The Sharks should be with Dan Boyle for each of those games – he was out tonight due to his new baby girl’s birth.  Nashville should once again be with Dan Ellis in net.  No word on Evgeni Nabokov’s health, though it is probably a safe bet that Boucher will be in net.

The one guarantee is that San Jose has not seen the last of what Dan Ellis is capable of.  To be continued…