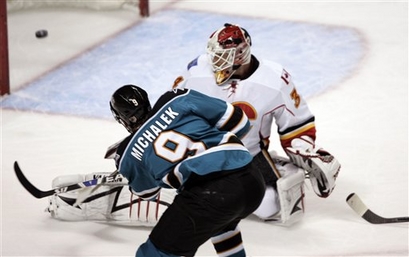 Earlier today a certain Mr. Plank asked, "Where is the [Sharks'] power play?"

The Short of It

The San Jose Sharks embarrassed both Miikka Kiprusoff and the Calgary Flames as a whole by scoring 4 goals - 3 on the power play - in the first period, en route to a 6-1 victory tonight at the HP Pavilion.  The Sharks outshot the Flames 46 to 24, marking the 9th time this season that San Jose has made over 40 shots on goal.

Tonight's game marked the first time the rivals have met since the 2008 quarterfinals, when San Jose ousted coach Mike Keenan's crew after the full seven games.  For those that don't recall, Game 7 was highlighted with 4 points from Jeremy Roenick.

The Flames had 11 penalties this evening, resulting in 9 power plays for the Sharks - who converted on 4 of them.  Both even-strength goals came courtesy of Milan Michalek, who now has 5 for the season.  Calgary's only goal - which ruined Brian Boucher's shutout bid - was by former L.A. Kings winger Michael Cammalleri during a Flames power play in the third period, after the Flames were already down by 6 goals.

The Long of It

The first period saw the most excitement for San Jose, though it was bittersweet.  Before any of the Sharks goals could be scored, forward Mike Grier suffered a lower body injury that left him visibly devastated - it took him two tries to get up, and when he finally skated off the ice, he raised his stick over his head and slammed it down in anger.  He did not return.  Prior to his injury, Grier had 2 shots on goal, including a wrap around attempt denied by Kiprusoff.

Calgary was later called for too many men on the ice, and the Sharks were back on the power play.  Rather than scoring too early, the Sharks converted with just 3 seconds left on the man advantage, courtesy of captain Patrick Marleau (and assisted by Blake and Joe Thornton).  Marleau's goal - his 8th of the season -  tied the Sharks' franchise record set by Owen Nolan for most power play goals (75).

Worth noting - Marleau's goal came on the 17th shot, while Calgary had just 3 of their own.

The fun was not yet done for the Sharks and their fans, who shouted "We want pizza!" (four goals from the Sharks earns everyone in attendance a personal pan pizza from Round Table).  After former Anaheim Duck / Vancouver Canuck Todd Bertuzzi was called for high sticking, Joe Thornton wristed his third goal of the season past the one-time Sharks goaltender Kiprusoff.  Dan Boyle made a centering pass that just touched Devin Setoguchi's stick, before Joe chipped away at it.  The Sharks now had a commanding 4-0 lead at less than 18 minutes of play.

After the buzzer sounded, Brad Staubitz (who would finish the night with 8 hits) and Dion Phaneuf were called for separate penalties (slashing and cross-checking, respectively).  The buzzer also signaled the end of ice time for the beleaguered Miikka Kiprusoff, who let in 4 goals on 20 shots in the period.  He would be replaced by rookie Curtis McElhinney at the start of the second period.

Unfortunately for Calgary coach "Iron" Mike Keenan, the change in goaltenders brought no change to the Flames' fortune.  Milan Michalek struck with his second even-strength goal of the night during the 4-on-4, just 1:18 into the second period.  Christian Ehrhoff and Dan Boyle assisted yet again, and the Sharks now led 5-0 on their 22nd shot on goal.

The Flames went on their first power play of the night after Michalek was called for hooking at 3:03.  However, their man advantage was marred by a shorthanded breakway by Dan Boyle and Marcel Goc, though no goal was scored.

After 30 minutes of play, the Sharks were outshooting Calgary 28 to 9.  Mike Cammalleri was then called for tripping, and the Sharks found themselves on their fourth power play of the night.  After the Flames managed to kill the penalty, Brad Staubitz was called for interferring with Craig Conroy.  In the ensuing Flames power play, Marcel Goc had a fantastic shorthanded breakaway, only to be hooked by Adrian Aucoin, creating a 4-on-4 situation that yielded some nice saves by Brian Boucher.

At the end of the second, the Sharks were outshooting the Flames 35 to 13, and were still up 5-0.

The third period brought a spark of intensity from the Flames - they put 3 shots on goal in 48 seconds.  Fortunately, Boucher made some marvelous saves before the puck made its way to the opposite end of the ice, where Adam Pardy hit it into the stands, earning him a delay of game penalty.  Rene Bourque added a hooking penalty to the mix to allow the Sharks to go on a 5-on-3 for 47 seconds.  The Sharks only needed 22 seconds to make it a 6-0 game, as Joe Pavelski slapped his second power play goal of the evening past McElhinney.  Defensemen Dan Boyle and Rob Blake assisted, marking 9 total points notched by the Sharks' defense this evening.  The Sharks were outshooting the Flames 39 to 15 at this point, and had converted on 4 power plays. After Daymond Langkow was called for tripping, Jody Shelley began the first of two penalties - the first for tripping, and the second for interference.  It was during the latter penalty that Michael Cammalleri ruined Brian Boucher's shutout bid - Adrian Aucoin and Curtis Glencross assisted.  Also worth noting is Douglas Murray's subsequent passive assault of Craig Conroy: the Flames center ran into Murray, only to bounce away before tumbling down to the ice.

The Flames' goal was merely a symbolic victory, as the Sharks finished the game 6-1.  They also outshot the Flames 46 to 24, and embarrassed two goaltenders and 18 other players, to say nothing of a certain outspoken (albeit Stanley Cup winning) coach and his staff.

Another symbolic *victory* of sorts for the Flames - Dion Phaneuf led both teams' players in ice time, with 24:51 (followed by new father Dan Boyle at 24:32).  However, Phaneuf, unlike Boyle, finished the evening with a minus rating.

The Sharks travel to Chicago to begin a pair of back-to-back games this Sunday.  They press on to Nashville on Monday.  The next Sharks home game is on November 22 against Alexander Ovechkin's Semin's Washington Capitals.