Share All sharing options for: Sharks edge Blackhawks 6-5, go 4 for 6 on power play (!)

The San Jose Sharks became the first NHL team to register 30 points or more thus far in the season, with their road victory earlier today against the Chicago Blackhawks, 6-5.  Chicago's loss marked the first time they had lost in regulation at home this season. 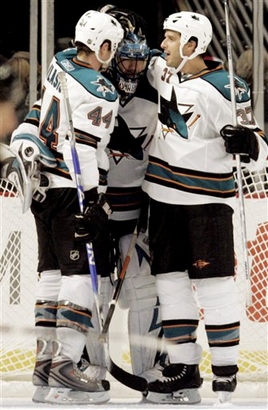 The game was ripe with subplots.  Former Sharks rental defenseman Brian Campbell was on the ice with his old teammates for the first time since San Jose lost Game 6 of the 2008 Semifinals, in Dallas; new Sharks defenseman (and Campbell improvement replacement) Dan Boyle would have a chance to prove his worth to the Sharks and their fan base by going head to head against his predecessor.

The Sharks also had their fathers (or, in the case of Patrick Marleau, their brothers) in attendance, in a Detroit-like father-son roadtrip.

Oh, and both Brian Boucher and some guy named Jeremy Roenick made their return to the Windy City (again).

Jonathan Cheechoo was back on the ice for San Jose tonight for the first time since his injury on November 6 (courtesy of St. Louis' Keith Tkachuk), while fellow winger Mike Grier was a not-so-healthy scratch as a result of his injury sustained against the Calgary Flames on November 13.  Sharks goaltender Evgeni Nabokov was still out following his shootout injury victory against the Blues, though it seems likely he will be in net against the Washington Capitals at home next Saturday.  In net today were Brian Boucher for San Jose and former Washington Capital Cristobal Huet for Chicago.

San Jose made their presence known just 42 seconds into the game, when Milan Michalek scored right off the faceoff for his sixth of the season.  Joe Pavelski got the assist.

It took the Blackhawks about 8 minutes, but they tied the game during a Sharks power play (Cam Barker called for high sticking), after failing to score on a power play of their own (Brad Staubitz called for interference).  Kris Versteeg robbed Boucher of the puck after the latter badly misplayed it behind the net, and promptly backhanded it in to tie the game at 1.  Shorthanded, unassisted, and - from a Sharks perspective - ugly.

Not to be deterred, Joe Thornton converted on the same power play just 24 seconds later.  He banged in off a rebound to get his 4th of the year, and to take the Sharks to a 2-1 lead.  Devin Setoguchi and Patrick Marleau got the assists.

Sharks defenseman Douglas Murray collided with Chicago winger Adam Burish at the boards, which led Burish to challenge Murray.  Murray's 240 lbs. (and strong fighting record) vs. Burish's 189 lbs.... do the math.  Despite not falling, Burish was no match for Murray.

The aforementioned Campbell tied the game for the Blackhawks by blasting one in from the right point, with assists from Cam Barker and Martin Havlat, at 17:33 of the 1st.  The even-strength goal was Campbell's 3rd of the year.

The first penalty of the period (Chicago winger Andrew Ladd called for slashing) led to the go-ahead goal by Dan Boyle, who beat Huet on a tip in, set up by Joe Pavelski.  Marc-Edouard "Pickles" Vlasic also assisted, at 5:51.

San Jose seemed to take a commanding lead on an unassisted even-strength goal by one-time Blackhawk Jeremy Roenick, who outright stole the puck from Chicago defenseman Brent Sopel and backhanded it past Huet.  The Sharks now led 4-2.  Roenick's goal - the 510th of his career - was his first regular season goal since March 28, against the Anaheim Ducks (incidentally with Brian Boucher in net).

Worth noting are the Blackhawks' fans, who showed excellent poise and - ironically - loyalty, in applauding their old star on his first goal of the season.

Meanwhile, Kris Versteeg continued to be the nemesis of Boucher, and cut into San Jose's lead just 103 seconds after Roenick's goal.  Jonathan Toews and Patrick Kane assisted on the fluke goal that banked off of Boucher's stick after being passed from behind the net.

Cam Barker tied the game at 17:34 during a Blackhawks power play (Tomas Plihal - high sticking), by tipping in a blue line blast from Brian Campbell.  Jonathan Toews notched his second assist of the night on the play.

Just 9 seconds after Chicago's power play goal, the Blackhawks again went on the power play, as Joe Thornton was called for slashing.  It took just another 9 seconds before Chicago actually went ahead of San Jose 5-4 = Patrick Kane, at the right circle, was set up nicely by Brian Campbell, and beat Boucher on a slap shot.  Cam Barker also assisted, for his 3rd point of the night.

Three straight goals from the Blackhawks - including 2 on the power play - had quickly dissolved the seemingly unstoppable Sharks' lead.  The Sharks were also badly outshot 15 to 6 in the period, although they scored on 2 of those 6 shots.

The Sharks didn't take long to take the lead out of Chicago's hands.  It would take slightly longer to strip them of the win itself.

Chicago's David Bolland was called for tripping just 39 seconds into the period - and thanks to crisp passes from Vlasic and Pavelski, Dan Boyle was able to wrist a shot past Huet to tie the game at 5, just one minute even into the 3rd period.

Troy Brouwer was shortly thereafter called for tripping.  Though nothing ultimately came of that Sharks power play, the Sharks converted on the next penalty, which began at 14:31 (Dustin Byfuglien called for - surprise - tripping).  Leading Sharks scorer Devin Setoguchi got his 10th goal of the year from the high slot near the right point, with assists from Christian Ehrhoff and Joe Thornton, at 15:45.

Setoguchi's goal would stand as the game winner, after the Sharks successfully killed the ensuing Ryane Clowe penalty (hooking at 16:48).  Boucher managed to stay afloat once the Blackhawks pulled Huet for the extra attacker, and held on to guarantee a full two points for San Jose - and none for Chicago.

The Sharks outshot the Blackhawks 13 to 8 in the period, bringing the total shots on goal to 31-33, in favor of Chicago.  San Jose did have the edge in faceoff wins, however, 38 to 34.

Brian Campbell led both teams' players in ice time, at 25:21, followed by Marc-Edouard Vlasic at 24:48.  Vlasic finished with a plus-1, while Campbell, despite his 3 points, was a zero.

Equally unsightly - Dan Boyle, despite his 2 goals on 4 shots on goal, was a minus-3.  His old Tampa Bay compatriot Brad Lukowich was a minus-2.  Jonathan Cheechoo, on his return to the ice, had four shots on goal, along with Milan Michalek, but failed to register a point.

The Sharks head to Nashville tomorrow (Monday) to once again take on Dan Ellis and the Nashville Predators.  Game time is at 5pm PST.

Given the manner in which Boucher played tonight (two alarming gaffes, both of which resulted in Versteeg goals, plus a .848 save percentage), in addition to the back-to-back scheduling, do not be surprised if Thomas Greiss has his first start of the season across the ice from Ellis.

For what it's worth, Herr Greiss might also want a chance to see his son in action - and hopefully register his first NHL win.