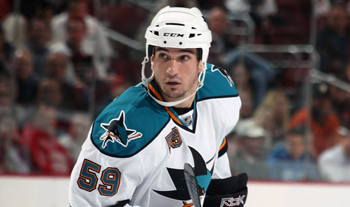 Staubitz has played in nine games with San Jose during two stints, posting one assist and 25 penalty minutes.

Doug Wilson hasn't been one to shy away from taking advantage of two-way contracts this season, and his latest move is no exception. I'm a little surprised with the transaction- Staubitz's line (with Shelley & Roenick) did an excellent job of injecting life into the team, as well as providing the physicality that would be necessary against Calgary and Nashville*. San Jose hasn't had a true "grind line" for as long as I can remember- I'd wager this isn't the last time we see Staubitz at The Tank.

* This could have a lot to do with why he was sent down- upcoming matchups with Chicago and Washington will be more finesse based affairs. Dallas on the 28th, not so much. But we'll tackle that when it comes time.

So what can we garner from this move? A couple of things:

2) Evgeni Nabokov might not be coming along as quickly as we were led to believe. The jury is still out on this one, but it seems slightly odd Griess wouldn't have been sent to Worcester with Staubitz if McLellan was planning starting Nabokov on Saturday. With nearly this whole week off, I assumed Nabby would be rehabilitated. Thirteen days out and counting.....

That being said, it's not a problem- at least not yet. There's no need to rush him back when Boucher has been picking up wins, and doing a relatively good job between the pipes (besides the hiccups in Chicago).

It's also possible that we will be seeing Griess sent down later this week, or that management will carry three healthy goaltenders for the time being. Pretty unlikely considering Worcester has a game on Saturday, and Griess could use the game time. All he's doing in San Jose is filling a roster space.