Back in Black - Sharks return home to stomp Capitals, 7-2

Share All sharing options for: Back in Black - Sharks return home to stomp Capitals, 7-2 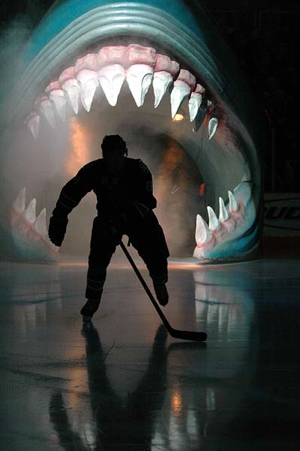 When the Washington Capitals entered the HP Pavilion tonight, they no doubt hoped for the following:

2.     Their first victory over the Sharks PERIOD after 10 straight losses (the longest losing streak the Caps have against any NHL team).

3.     A victory for Bruce Boudreau's one-year anniversary as the Capitals' coach.

4.     Alexander Ovechkin's first point ever against the San Jose Sharks (the only team he has not yet dented on the scoresheet).

The San Jose Sharks improved to 11-0-1 at home (17-3-1 overall) with tonight's lopsided 7-2 victory over the visiting Capitals, which was also the first time that Team Teal wore their spiffy all-black third jerseys (BlackArmor).  As Jeremy Roenick himself said from the Jumbotron, "This is the jersey I would buy... and I probably will."

The well-rested Sharks seemed to be overwhelmed by the road-weary Capitals during the first nine minutes of the game.  From the opening faceoff (which Washington won), the Capitals pressured the Sharks to the point that the Sharks were losing the majority of the faceoffs AND were without a shot on goal.  In addition, Washington pugilist Donald Brashear bested Jody Shelley about three and a half minutes into the game, despite a few well-landed blows by the Sharks enforcer.

Add to that a Douglas Murray penalty for high sticking (which the Sharks managed to kill), and you have a good idea of the frustration the Sharks were feeling.

Worst of all, there were no shots on goal for San Jose after NINE MINUTES of game time.

Well, better late than never for San Jose - Patrick Marleau scored his tenth goal of the season on the Sharks' first shot on goal, 9:13 into the first period.  Dan Boyle and Devin Setoguchi assisted, for their 11th and 12th assists of the season, respectively.

It went downhill from there for the Capitals.  Just over three minutes later, Sharks fans were witness to a rare treat indeed - an own-goal by the opposing team.  Washington defenseman Shaone Morrisonn felt the urge to sweep out a puck that, untouched, would have gone out of danger at Brent Johnson's crease.  In a bit of serendippity for the Sharks, Morrisonn completely propelled the puck into the net, making it 2-0, San Jose.  Ryane Clowe was the last Shark to touch the puck, but Joe Pavelski was initially credited for the goal, before a scoring change was announced in the second period, giving official credit to Clowe for his 10th of the season.  Rob Blake and Milan Michalek were given the assist nods.

Just five seconds after the Capitals killed a David Steckel high sticking penalty, San Jose struck again.  Devin Setoguchi slapped a shot from the right circle to best Brent Johnson, for his 12th goal of the year (Joe Thornton and Patrick Marleau assisting), at 15:45.  San Jose now led 3-0, yet had only put up FIVE shots on goal.

Curiously, Rob Blake almost pulled a Shaone Morrisonn at 16:40, but Brian Boucher had evidently been taking notes from across the ice, and dismissed disaster with a cover up.

The Washington Capitals outshot the Sharks 8 to 5 in the first, but with nothing to show for it, found themselves down 0-3.

Todd McLellan no doubt stressed the importance of winning faceoffs to the Sharks during the intermission - San Jose responded by winning the opening one.  However, in shots on goal, the Sharks quickly found themselves down 5 to 1 after 6 minutes, including part of a Sharks power play (Tyler Sloan called for high sticking Milan Michalek, at 4:56).

Alexander Ovechkin seemed poised to end his scoring drought against San Jose at 7:36, but Boucher managed to make an important save.  However, just 20 seconds later, the Caps got on the board courtesy of Tom Poti.  Poti managed to get the puck past Boucher while traffic swelled at the Sharks' net.  Former Shark winger Matt Bradley and Tyler Sloan earned the assists.

Point of note - the Sharks were winning just 37% of faceoffs at this point in the game.  The Capitals also had 26 hits, compared to San Jose's 15.  Still, the Sharks led 3-1.

San Jose extended that lead to 4-1 on just the 10th shot on goal, when Joe Thornton deflected a shot by Marc-Edouard Vlasic during a power play (Michael Nylander called for holding), at 12:19.  Thornton's fifth goal of the season was also assisted by Dan Boyle.

Donald Brashear earned a 10-minute game misconduct at 15:22 - Jody Shelley was present, for what it's worth.

At 18:01, Joe Thornton snowed Brent Johnson, earning him a two-minute minor for unsportsmanlike conduct.  During the Washington power play, Mike Grier blocked a shot, causing it to go out past the Sharks' blue line.  Enter Patrick Marleau, who broke through to get it to Johnson's net.  His shot was just barely saved, and Mike Grier was just unable to make use of the rebound.

No matter - Alexander Ovechkin was subsequently called for hooking at 19:07, and the Sharks found themselves back at even-strength, on the 4-on-4.

Twenty seconds later, Marc-Edouard Vlasic blasted a shot from the left point to score his second goal of the year.  Rob Blake and Jonathan Cheechoo assisted, and the Sharks now led 5-1.

The Sharks finished the period with 10 shots on goal, compared to Washington's 8.  Needless to say, the Sharks made the most of those ten shots.

A minute and a half into the third period, Devin Setoguchi was called for hooking Alexander Ovechkin.  However, as some fans noted, it seems possible that Ovechkin grabbed onto The Gooch's stick.  Conspiracy theories aside, Ovechkin made the most of the ensuing Capitals power play by registering his first career assist against the San Jose Sharks.  Tomas Fleischmann had the goal (his 8th of the year), and Nicklas Backstrom had the second assist, at 2:19.

At 4:35, Tom Poti was called for holding, and the Sharks found themselves on their fifth power play.  Less than a minute later, the man advantage was increased to 5-on-3 when John Erskine was called for slashing.

This was the perfect opportunity for Ryane Clowe to *legitimately* score a goal - which he lost no time in doing, just 23 seconds later.  His 11th of the season was assisted by Rob Blake and Dan Boyle, on the Sharks' 19th shot on goal.  Incidentally, Clowe's shot brought the Sharks ahead of the Capitals for the first time in shots on goal.  More importantly, the Sharks now led 6-2 with less than 15 minutes left of the game.

Also worth noting - a bit before Clowe's goal, it was reported via radio (and told to this writer by a neighboring fan) that a puck went out of play to the Capitals' bench, where it hit their trainer in the head.  Ouch...

At 11:48 of the period, both Nicklas Backstrom and Rob Blake were called for roughing.  The Capitals took the 4-on-3 advantage at 13:10 when Christian Ehrhoff was called for hooking.  Fortunately, the Sharks killed the penalty, and found themselves ahead of the Capitals 25 to 19 in shots and goal (to say nothing of the scoreboard).

Mike Grier scored his third goal of the season, and his first upon returning to the Sharks lineup after missing 2 games, with just 53 seconds left of the game.  Jeremy Roenick earned his 2nd point in 3 games, and Rob Blake notched his FOURTH assist of the evening.

Lastly - the pesky Detroit Red Wings are keeping pace with the San Jose Sharks, thanks to their victory over the Calgary Flames tonight.  They have 2 games in hand against the Sharks, and would tie the Sharks in points if they win those two games (note - that does not factor in any progress the Sharks might will make).

Which should bring us all to say - in unison - GO SHARKS.