Share All sharing options for: Sharktistical Analysis: The Amazing Setoguchi

[Editor's Note]: For archiving purposes, this article has been republished. It was originally authored by That'll Cheech You on November 9th, 2008; the initial FanPost can be found here. 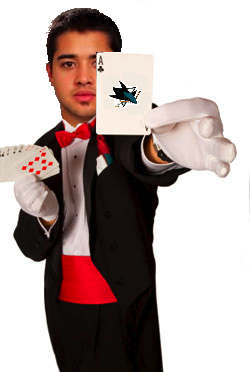 Thought this would be a good post to take our minds off that tough, Ron Wilson-esque loss.

If I were to ask you to name a player drafted in 2005, you would probably give me one answer. I mean, he's the face of the NHL right? One of the most skilled players to ever play the game, his ceiling is infinite. Easiest question ever.

Ok, maybe no one thinks of anyone else but Sidney Crosby. But, statistically speaking, Devin Setoguchi is deserving of just as much recognition as Crosby for his play in the 2008-2009 season.

After a brief NHL stint due to injury in 2007-2008, Devin has cemented himself on the first line of possibly the best team in the NHL. When looking through NHL news, however, it is rare to see any mention of his name or early season success. Other 2005 draftees, such as Crosby, Jack Johnson, Anze Kopitar, Marc Staal, Carey Price, and Bobby Ryan seem to get much more national attention. When looking at their stats though, it seems as if that bias is somewhat unfounded.

For comparison's sake, I chose to analyze picks 1-12 (the pick the Sharks would have had if they didn't trade up to pick Setoguchi). Now, Doug Wilson was highly criticized for moving up to take Setoguchi early, but it seems as if he made another wise decision.

We have all seen him play, and we all know that he is playing well. However, it is not until you compare Setoguchi with the rest of the cream of the 2005 crop that you see how impressive his season to date has really been.

It seems as if Setoguchi is having a break out season; surpassing most of the 2005 draftees, and keeping pace with the established players such as Crosby and Kopitar. His 7 goals lead the pack, and his 14 points are second only to Crosby. If he continues on his current pace, he would finish the season with 38 goals, 38 assists, and a plus 27. Although that seems unlikely, a 30-30 season is possible for this rising star.

At age 21, it looks like Wilson has added another young piece to a winning franchise.