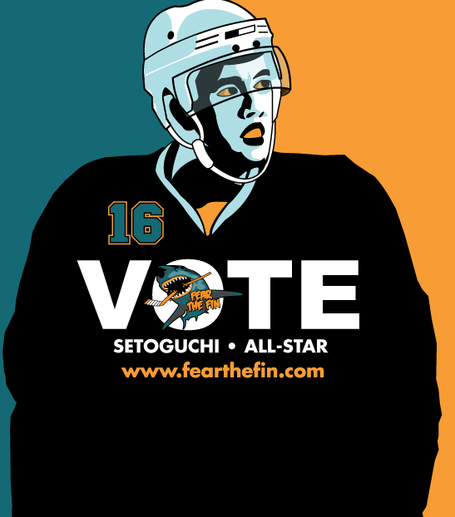 All-Star Voting. No matter what professional sport you look at, it's almost always a crapshoot. Teams like the Yankees, Lakers, and Red Wings usually field the most all-stars, due to the fact that these teams have the largest fan bases in their respective sports. This year in the NHL is no exception.

Currently, Marian Hossa, Pavel Datsyuk, and Heinrik Zetterberg lead the Western Conference in All-Star Voting. Granted, these players are all having wonderful seasons, and sit among the league leaders in points.

Problem is, there are four players who sit above Hossa (26 PTS), and four more who sit above Zetterberg and Datsyuk (23 PTS each) in points scored. The top three point scoring players in the West, Iginla (29 PTS), Kane (29 PTS), and Getzlaf (28 PTS) are all receiving votes, coming in just behind the trio of Red Wings.

Still, there is one player who is getting ignored. Bet you can't guess who that is.

Well, scratch that. I bet you can. If you've read Fear the Fin, The Battle of California, Vote for the Gooch, or any other Sharks related site in recent months, you'd know that I'm talking about Devin Setoguchi.

Even though the Gooch is deserving of an All-Star nod, he's currently pulling up the rear with only 21,517 votes (including my most recent ballot). For comparison's sake, Hossa leads all vote-getters with 205,146. Bringing up the total is going to be a challenge, as the staff at FTF doesn't have any Rory Fitzpatrick type tricks up our sleeves.

That's where you come in. As you may have seen above, FTF has enlisted the services of tony.psd; an amazing bay area artist who does frequent work for the Golden State Warriors SB Nation Blog, Golden State of Mind. He's helped us create an image that is reminiscent of another unlikely candidate recently elected into a pretty significant political position. We're hoping the magic carries over. Feel free to post the image on your site, send it to a friend, or just show it to your Sharks lovin' cat.

So please, take a little time and Vote for Setoguchi. He'll be more than excited about it.