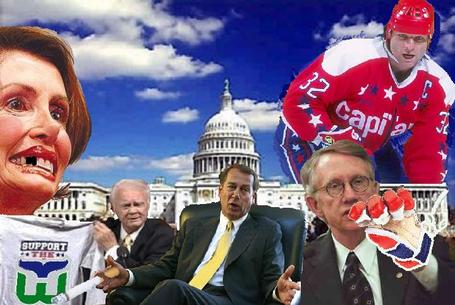 Considering today is election day in the United States of America, here's a few fun facts about the two states involved, as well as some general articles that I found interesting:

* What is the only state to vote Democrat in the Presidential election since 1976? You guessed it- Cali...er, Minnesota. Wait, Minnesota? You betcha. Minnesota was the only state in the entire frickin' Union not to vote for Reagan in 1984.

* Both states have had actors as Governors- Jesse Ventura (MN) and Arnold Schwarzenegger (CA).

* Slate takes a look at the greatest fictional presidential candidates. They are obviously missing a huge one.

* Al Gore (2000) was the first Presidential Candidate since Grover Cleveland in 1888 to win the majority and not become elected President.

* Dixville Notch is the first town in the US to vote- the polls open at midnight every election day.

* Most polls close at 8 PM in our humble state, so if you plan on voting, do it before faceoff. Me? I'm writing in Jamie Baker with Mike Ricci as VP.

I haven't seen too much of the Wild this season, but a quick glance at the standings board and a read-through of some assorted blogs (The Wilderness in particular) shows that they are a pretty solid team. They have this player named Cal Clutterbuck- if I'm the Wild's play by play guy, and Cal has a great shift, it would be damn hard not to exclaim, "Clutterbuck is causing a clusterfuck in the offensive zone!" Or something of that sort.

Owen Nolan was placed on the IR yesterday, so his heavily publicized "Return To The Tank" will be postponed until later this season.

San Jose, San Jose. What can I say? The team is firing on all cylinders right now, and what impresses me most is the consistency we've shown. There hasn't been a game where you could make a case for us deserving not to win. Granted both Philly games were horrendous defensively, but other than that we've played well, or at least well enough to win. The shutout in Anaheim was due in a large part to Giggy's phenomenal play, and the loss to Florida also saw some solid netminding from Tomas Vokoun (who made 47 saves).

Also, take a look at our scoring depth. 11 players have totaled at least 6 points through 12 games (the point total may seem arbitrary, but I used it figuring a .5 P/GM clip was a solid indicator of point production). This is phenomenal. The system is working.

Defensively the Sharks have improved as well, which seemed to be (just grasping at straws here) part of McLellan's plan- improve on what was lacking last year (goals, speed through the neutral zone, bodies in front of the net, defensemen pinching and taking chances) and then focus on our back end.

One thing to look for- we give up a lot of two on two opportunities, yet are always are able to shut them down. Vlasic is slowly but surely becoming one of my favorite players to watch- probably our best shutdown defensemen. He's not physical (3 hits thus far, which is almost appalling for a d-man, yet alone a guy who leads the team in ice time), but possesses a masterful ability to drive forwards wide and poke-check the puck away.

Prediction: Sharks win 3-1. Goals by Clowe, Lukowich, and Cheech. Torrey Mitchell gets some tips from Kurtis Foster after the game on leg rehab.