Share All sharing options for: Sharktistical Analysis: A Look At Previous Cup Winners

With Thursday's upcoming game against Anaheim, and the Sharks "tying" the 1943-44 Canadiens for the best start in the history of the league, I thought it would be a good time to take a look at the last two Cup winners record through 27 games.

However, I would like to note that we are only about a third of the way into an 82 game regular season. And as we are all painfully aware*, the Sharks have had a large amount of wins during these type of games during the past few years- it's the last 16 that seem to elude our grasp.

Another point that should be made is that the last half of the season generally carries more weight when looking at a team's performance going into playoff time. Rest assured we will re-touch upon this again at a later date, whenever is most convenient. That would be the period in the day when I've chased those damn kids off my lawn (little brats never do learn), and have some free time before watching Maury figure out who fathered Valerie's baby. My money's on Kyle, although Lenny looks pretty fertile.

* If the slogan "Where The Second Round Is Overrated" means nothing to you it's likely that you are in the wrong place. Adjust your reading habits accordingly- although world news is fairly disheartening most of the time as well. Maybe if the Sharks can win 8 games in the playoffs world hunger will cease to exist. That'd be a correlation I could live with.

Without further adieu (thanks for making the jump!), let's take a glance at the 06-07 Anaheim Ducks and the 07-08 Detroit Red Wings.

* An astute fellow may notice the NHL standings board has the Sharks at 102 goals, while my table has them with 100. All shootout game winners have been omitted.

There's some slight hindrances on what we can reasonably say about the comparison amongst the three, considering the data comes from different situations. For example, power play opportunities are up league-wide this season (although the Sharks power play opportunities don't seem to be drastically different when compared to Detroit and Anaheim) and the addition of having a faceoff in the offensive zone after a penalty is called has resulted in an increase of power plays converted. The rosters themselves aren't applicable (we won't be playing these teams), strength of schedule is different (in 06-07 I think the Stars had 100+ points and finished third in the division), and a whole multitude of other shit has probably changed as well.

All caveats aside, there are some things that are worth mentioning:

1) The Sharks record hasn't benefited from "soft" points*. The 06-07 Anaheim team seemed to get a points boost for losing games in the shootout/overtime (by and far the worst rule of all time, and not just because it paid dividends for the Ducks in the first 27 games of their Cup-year). If you compare the Sharks to both teams in this regard, it's fairly obvious that we're playing some great hockey. Not that we didn't already know that.

*In fact, you could even make the case that (in the two games where the Sharks earned a point for a loss), San Jose outplayed their opponent for that night. An unlucky bounce off Ehrhoff's skate against Edmonton, and a ridiculous performance from Dan Ellis against Nashville played a large part in those losses. The Sharks completely outplayed both teams for damn near the duration of all 60 minutes- if there was ever a case for having the "one point for a loss rule", that would be Exhibit A and B.

2) Goals, goals, goals**. The Sharks outscore teams at a large rate when compared to their predecessors, although we are giving up more goals. This may cause a problem later on down the line as games tighten up defensively, but the differential is so large I don't think much will change as long as we stay healthy and the forwards continue to keep to the offensive ideals- shooting off the rush and driving two forwards to the net.

** Hum "Girls, Girls, Girls" by Motley Crue while you read that line. Someone should do a Sharks cover of that song (while leaving out the whole home video on a boat escapade).

3) If there is one area the Sharks can improve on it would have to be the PK. I'd like to attribute the slight shortcomings to the fact Torrey Mitchell has been out all season long, but let's not forget the lack of Rivet, Brown, and Rismiller on our shorthanded unit. Those players were some key cogs in the machine. Even with Pavelski and Marleau stepping in nicely to fill in the forward slots (hell even Michalek while we're at it), you would be hard pressed to convince me Rob Blake is an upgrade over Craig Rivet. It's not even near being a problem (9th in the league as of this morning), but it should be something we look at closely as the season drags on.

Both Anaheim and Detroit had excellent penalty killing in the postseason during their respective title years; it's something the Sharks have lacked during the playoffs. In fact, I would allocate a lot of Anaheim's success in 06-07 to their shorthanded unit- the ability to kill penalties regularly allowed them to play with more physicality than is usually advised in games where momentum (and goals) can turn the tide of a series in a heartbeat. It wore down their opponents physically and mentally, creating an aura of invincibility. "We're going to take liberties and not pay the price."

Although Detroit's path lacked the brutality of Anaheim's, that aura of invincibility always seems to come into play once you face the red and white. Look no further than game four in 2007- Holmstrom bats the puck out of the air with less than 10 seconds left in the second to put Detroit within one, and Lang ties the game with 30 ticks to go in the third to force overtime. Talk about big-time. 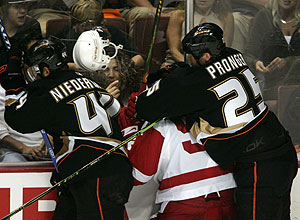 I was livid and thrilled when this happened; talk about a paradox

Yada Yada: The Sharks seem to be holding up well to the Cup-winners of year's past, and although the chart is not terribly revealing on what sort of playoff success will be achieved by this club, it's difficult to find a troubling area that may be masked by their extraordinary record through the first 27 games. I doubt the current pace will be upheld (139 points is an absolutely insane expectation), and while the PK may be the biggest concern on a team with virtually none to speak of, Torrey Mitchell's return in a month or so will give the shorthanded team some relief and possibly decrease Patty's minutes (which would pay off towards the end of the year).

All in all, things look good.

H/T to Earl Sleek of BOC for his season-by-season spreadsheet which was used to compile Anaheim and Detroit's numbers.