I love playing the Ducks- there's nothing like it. The rivalry amongst Northern and Southern California, the high-skill level on both teams, the fact that all 36 skaters seem to give a little extra oomph into each check- it's a recipe for some exciting tilts. There's bound to be a lot of barbaric behavior tonight as the last meeting featured three fights. Make sure to adjust your mouthpieces accordingly.

Anaheim has effectively broken out of their early season slump, posting a 15-6-3 record after they earned their first win against the Sharks nearly two months ago. Teemu Selanne is as dangerous as ever on the power play (with 12 PPG), and a post dental-visit Ryan Getzlaf is flirting with a possible (although fairly unlikely) shot at the Art Ross Trophy. 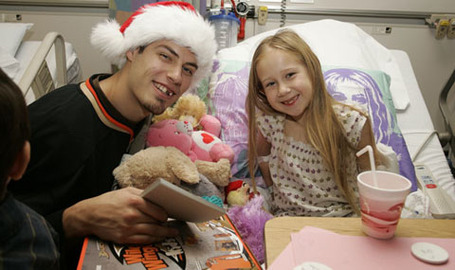 A helping hand in the community and an owner of some of the best hands on the Ducks, Ryan Getzlaf's mitts are never too full due to their immense size.

From what I can remember (in regards to the 4-0 loss in Anaheim), Giggy was positioned very well and didn't give up a whole lot of rebounds- when he did, the Ducks defense did an excellent job of tying up our forwards sticks in front so we were limited in our second chances (something that has been huge thus far in our scoring production). I don't remember seeing too much of Getzlaf or Perry, but their productivity has gone through the roof as of late so I would expect that line to be a big factor tonight.

I have a load of commitments this week (translation: this is the extent of my preview), but will be in the open game thread later tonight where we will celebrate a 3-1 Sharks victory at roughly 10 PM Pacific Standard Time. Goals from Marleau, Boyle, and Pavelski.

Joe Thornton got engaged to his longtime girlfriend, Tabea Pfendsack. The two met while Thornton was playing in Switzerland during the 2004-05 lockout season and have been together ever since.....

.....McLellan didn’t rule out having Cheechoo in the lineup, but did say he didn’t think it was likely that he’d be out there against the Ducks.....

.....Brad Lukowich practiced for a second day after leaving the Columbus game early with a groin injury, and McLellan said the decision on whether he would play would be made tomorrow morning.

Jonathan Cheechoo will miss his fifth consecutive game with an upper body injury and Brad Lukowich will sit out his second with a groin problem. That gives forward Tom Cavanagh a third consecutive start on the fourth line since being called up from Worcester. And it puts defenseman Alexei Semonov out there for consecutive games for the first time since Oct. 24