Share All sharing options for: Greatest Sharks: Front and Center 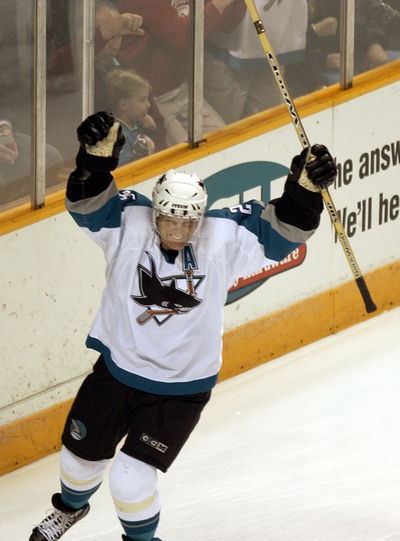 Although it's hard to deny that Larionov was an extremely skilled player, I would guess that more of us remember what Damphousse did for the Sharks as it was much more recent. It could be said that Damphousse was the Sharks' Joe Thornton (lite) before they had the real Joe Thornton, as he led the team with 186 assists over his five-plus seasons in Teal. Damphousse's presence on the Sharks was the one of the key factors that led to the team’s rise to prominence in the NHL.

With the addition of Damphousse, FTF has successfully filled the first position on the “Greatest Sharks” team. Here are the winners and what I think of the selections…

Center, Line 1: Joe Thornton: I think that many of us would have been happy to put Patrick Marleau in this spot as well, but Joe came away with a large chunk of the vote to earn the pivot spot on the top line. oozes talent out of his eyeballs, so it’s hard to justify putting Marleau ahead of him here. Marleau is surely the “sentimental pick”, but I don’t think he’d mind taking a back seat to Joe on this team. I think that all of you would agree with me that the addition of in the 2005-2006 season changed the Sharks from a competitive team to a dominant team. If he continues his strong play into his 30’s, we can all realistically expect some Hall of Fame talk (and perhaps some deeper playoff runs) in the future.

Center, Line 2: Patrick Marleau: On many other teams, Marleau would have been the hands down pick for first line center. He’s been the (humble) face of the franchise since he was selected 2nd overall in the 1997 NHL entry draft. Although many have doubted his leadership ability, he has successfully served as captain since the 2003-2004 season. What else has Marleau done? Well, he’s the Sharks all-time leader in points, goals, and assists for starters (although is hot on his trail, as far as assists go). Another interesting point… he’s played with every other center on this team; I’d say that Marleau is the glue that holds this team, the current Sharks, together. Trading him would have been one of the biggest mistakes in franchise history; I thank every religious deity possible (daily) that the trade rumors never came to fruition. Sharks fans have been lucky to be able to watch Marleau mature into one of the best players in the NHL.

Center, Line 3: Mike Ricci: This was an interesting choice in my opinion. There are pros and cons to having Ricci on this team, and I’d support someone’s point of view from either side. Pros: Ricci is the epitome of “grit”, he defines tough. His play served as a catalyst for the Sharks over many seasons; he was known for going all out, all the time. From 1997 to 2004, Ricci evolved into one of the most proficient defensive centers in the game, and helped the Sharks reach the Western Conference finals for the first time in 2004.  Cons: Although Ricci was a noted scorer earlier in his career (he scored 5 goals in one game against the Sharks in the 1993-1994 season), he never recaptured his offensive prowess while in . Ricci would only score 101 goals while in Teal, averaging less than half a point a game. It’s hard to justify the inclusion of Ricci (at least from an offensive standpoint) while Larionov is denied. That being said, I support the choice if we’re trying to build the best “all around” team. If we’re just looking for scorers, we could have gone elsewhere. However, when I think of the Sharks of old (you know, the 90’s) I always think of Ricci first. That says a lot.

Center, Line 4: Vincent Damphousse: I think I covered Damphousse pretty well above, so I won’t go into too much detail here. I’m really glad he made the squad; he’s one of my all time favorite Sharks and a notoriously good guy. Congrats Vinny.

So that leaves us with the players who didn’t make it: Jamie Baker and Igor Larionov. I’d support adding them to the roster at a later date; Larionov deserves at least a little recognition. And even if Baker doesn’t make the team, his famous goal will always live on as one of the greatest moments in Sharks’ history.

Feel free to comment on the winners below, I love the discussion these kinds of topics bring. Comment starter: Was Ricci deserving of selection?

Look forward to next week, when we continue with the forwards. Chuckle chuckle. Right Wing is next... vote early and often!