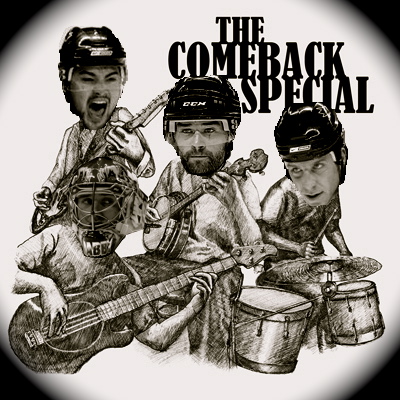 The Sharks and their fans have to hand it to the 14th place St. Louis Blues - they sure have made them sweat in their last two meetings.

Fortunately for San Jose, they overcame a two goal deficit to win 5-4, sending the Blues home from California without a win.  Curiously, both the Ducks and Kings were able to finish their games against the Blues this week with at least a two-goal margin, while the NHL's number one team had to climb back to secure a one goal victory.

The victory at home tonight improves the Sharks home record to 16-0-2, for a 24-3-2 record overall.  The Blues fall to a 12-14-3 record, for 27 points, just ahead of the Dallas Stars at the bottom of the Western Conference rankings.

San Jose took a few minutes to get warmed up, but then quickly began a peppering of the Blues' Chris Mason, beginning with Jody Shelley's shot on goal (the first of the night) at 3:32.  The Sharks took advantage of a high sticking penalty against Dan Hinote at 4:08 to send the shots on goal total to 8-0 by the 7 minute mark, though St. Louis managed to kill that penalty.  It wasn't until 7:29 that Evgeni Nabokov was directly tested for the first time, when Keith Tkachuk managed the Blues' first shot on goal.  Despite a penalty against Tom Cavanagh for hooking at 8:48, St. Louis would only manage one shot, as the Sharks successfully killed their first penalty of the evening.

Patrick Marleau put the Sharks on the board first with his 14th goal of the season - his slap shot from the blue line beat Mason on his stick side, at 12:43.  Joe Thornton picked up his first assist of the evening.  It had taken 11 shots, but the Sharks had finally cracked Mason.

Unfortunately for San Jose, Dan Boyle was called for high sticking at 18:07, and St. Louis managed to convert on their power play, on just their 4th shot of the night.  Brad Winchester wristed his first goal of the season from the right circle; he was assisted by David Backes and Alexander Steen, at 19:41.

The Sharks outshot the Blues 12-4 for the period, but ended up tied at 1 on the scoreboard.

It didn't take long for the second period to establish itself as one of the ugliest the Sharks have seen this season - just 98 seconds, actually.

B.J. Crombeen scored his 7th goal of the season on a backhand against a helplessly sprawled out Nabokov just 41 seconds into the period to take his Blues to a 2-1 lead.  Alexander Steen picked up his second assist of the evening, with additional help from Jay McClement.

Another 57 seconds later, Brad Winchester netted his second goal of the season on the Blues' 8th shot, catapulting St. Louis to a 3-1 lead (assisted by David Perron and Roman Polak).  Nabokov had now let up 3 goals on 8 shots.  Like the first period, the Sharks needed over 3 minutes to put up their first shot on goal...

Which was right before astonishingly ill-timed dual penalties to Jody Shelley, for interference and high sticking, at 3:14.

The Sharks managed a shorthanded opportunity when Patrick Marleau busted through the Blues defensemen, but Mike Grier squandered a chance to cut the lead when his weak shot was gobbled up by Mason.

The Sharks had a scare of their own when Tomas Plihal accidentally fed the puck to Keith Tkachuk just in front of Nabokov's net, though no harm was dealt.

Mercifully, the Sharks had managed to kill two successive penalties, and went back to work against the Blues, who managed to put up 12 shots to the Sharks' 5 by the 15 minute mark.

Just after that 15 minute mark, Marcel Goc stormed up the lefthand boards into the Blues' zone, and around Mason's net to center a pass to Tomas Plihal, who sent it to the net, where it was deflected in off the shaft of Mike Grier's stick.  Because Plihal was initially credited with the goal, Douglas Murray appeared to get his first point of the season... but upon review, the secondary assist became Goc's.

[On a side note to Douglas Murray - his name was somehow left off the official Sharks stat sheet for tonight's game.  Ouch...]

Not long after Grier's goal, St. Louis was dealt two penalties.  The first was a bench minor for too many men (served by Keith Tkachuk) at 16:06, which was followed by a slashing penalty to Yan Stastny at 17:28.  St. Louis went unscathed during those penalties (including 39 seconds of a 5-on-3 for San Jose), and finished the period with their 3-2 lead intact.  The Sharks managed to pull even for shots in the period, at 12, but still had work ahead of them in the final 20 minutes.

The equalizing goal for San Jose came at the hands of Devin Setoguchi at 1:15.  Patrick Marleau circled Mason's net to feed a pass to Joe Thornton, who immediately sent it to The Gooch, who patiently baited Mason before wristing it upstairs.  The game was now tied at 3 on the Sharks' 25th shot on goal.

Roman Polak took a hooking penalty at 3:19, and 13 seconds later the Sharks scored their third straight goal.  Ryane Clowe scored right off the faceoff, after Lukas Kaspar and Milan Michalek landed their sticks on the puck.  Clowe's power play goal was his 12th of the season.

Despite taking the lead yet again, San Jose would have to fight like mad to prevent it slipping away, when the Sharks were dealt two concurrent penalties, to Milan Michalek (hooking), plus a bench minor for too many men (served by Clowe), at 5:01.  In short, St. Louis would have a full two minutes of a 5-on-3.

The time was ripe for Evgeni Nabokov to save the Sharks' skin - his masterful saves were augmented by the Sharks' ability to drive the puck down the ice, killing the penalties.

The successful penalty kill would be immediately followed by a power play, as David Backes was called for interference at 7:03.  Similarly to San Jose, however, the Blues were able to repeatedly get the puck out of their zone, effectively killing the penalty.

Not long after, St. Louis tied the game at 4 on a very strong individual effort by the previously-penalized Backes, who busted through to the Sharks zone despite the protests of Dan Boyle, to net his 7th goal of the season past Nabokov's stick side.  His unassisted goal came at 10:29.

After Christian Ehrhoff landed a big hit on Yan Stastny, both men were called for slashing at 14:27.  It took just 30 seconds of the 4-on-4 for Captain Patrick Marleau to take  the Sharks to their third (and final) lead of the night.  Marleau nabbed the puck from Blues forward Jay McClement,  and his deft stick-handling through the slot proved too much for the Blues.  Joe Thornton and Brad Lukowich assisted; Thornton had his 3rd assist of the evening on Marleau's goal.

Tomas Plihal would make some good attempts at augmenting the lead, though he was foiled by Mason and the Blues.  The Sharks managed to keep Mason in net longer than coach Andy Murray would have liked: he was finally pulled at 18:45, just two seconds before Lukas Kaspar was called for hooking.  The Sharks would finish the period fending off a two-man advantage, but emerged successfully with their regulation victory.

The Sharks travel to Los Angeles to take on the Kings this Monday, before heading out east for back-to-back games against Columbus and (here we go...) Detroit, beginning Wednesday.