Share All sharing options for: Opposing goaltending strikes again! Steve Mason a gem for Columbus in 2-1 O.T. win over Sharks 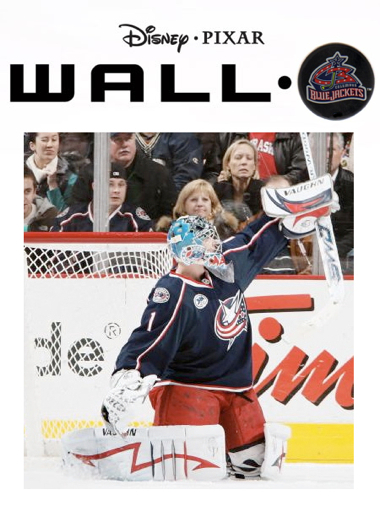 The San Jose Sharks entered Nationwide Arena with the 7th best power play percentage in the NHL, and the NHL's best record.

Though their record improved a point tonight, San Jose left the building with a 1-2 overtime loss, and with their power play ranking undoubtedly damaged.  The Sharks went 0 for 5 on the man-advantage tonight against the Columbus Blue Jackets; though the Sharks managed to kill the 3 penalties against them, as well as put up 45 shots in regulation, they couldn't bust the BJ's, who were largely kept in the game by goaltender Steve Mason, who stopped a career-high 47 shots.

The first two periods of play were a goaltending slug fest, with both Evgeni Nabokov and Steve Mason preserving the scoreless tie for a full forty minutes.  The efforts of the Sharks mirrored that of the Blue Jackets, especially in the first period, when each team went 0 for 2 on the power play... or as I like to think of it, 2 for 2 on the penalty kill.

The Sharks narrowly outshot the Blue Jackets 10-8 in the first period, but piled on a whopping 18 shots in the second (though the BJ's put up a very respectable 13), for a 28 to 21 ratio going into the third frame... when all hell broke loose.  Slight exaggeration.

Just 3:41 into the third period, and 36 seconds after killing a hooking penalty against Dan Boyle, Rob Blake and Patrick Marleau set up Devin Setoguchi, who deflected it past a wide open Mason.  The Sharks' #16 had scored his 16th goal of the season... and what would be the only teal-colored one of the night.  Steve Mason had saved 31 of 32 shots, for a then 96.9 SV%.  Yowza...

Around the 9 minute mark, Rick Nash was called for hooking by Marc Joannette.  I hope I speak for both teams' fanbases when I say it was a garbage call - but unfairly or no, the Sharks took their 4th power play of the night... and couldn't make good on it (and even allowed a shorthanded attempt by R.J. Umberger in a prelude of what was to come).

It took nearly 9 minutes before Columbus evened the game, cracking Nabokov on the BJ's 29th shot.  Michael Peca beat Nabby on his stick save after being set up from Jakub Voracek and Rick Nash.  For what it's worth, Nabokov's SV% was "just" 96.6.  In a word, disgraceful.

As Triumph would say: I kid, I kid.

The Sharks would once again break their own record for most 40+ s.o.g. games in a season, at 13:10 in the 3rd, when Goc's deflected shot was blocked by Mason.  Still, the game was tied 1-1, as Mason broke his previous number of record saves (previously 34 against Montreal) heading into sudden death.

Actually, goaltenders (normally) don't score goals - which is why Mason got the help he needed in a 2-on-1 attack.

Kristian Huselius and R.J. Umberger broke through the Sharks' lines, leaving Marc-Edouard Vlasic and Evgeni Nabokov as the last line of defense.  Sadly for Teal Town, Umberger won the game for the BJ's, 2:55 into O.T., on the only Columbus shot in sudden death.  Final score - 2-1, Columbus.  Mason's save percentage - 97.9%.  Nabby's - 93.8% (30 saves).

Despite losing one of two points tonight, the Sharks have gone 15 games without a regulation loss.  Their last loss (one of only three, all on the road) came at the unlikely hands of the Phoenix Coyotes on November 9th.  What a month we've been having, folks! (to say nothing of the season)

The Sharks head to Detroit tomorrow, when Todd McLellan's insider information will hopefully once again best the Red Wings.  We can only pray... or is that prey?