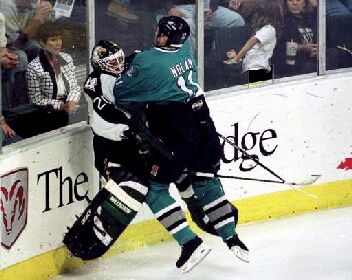 Yea, we should have seen this one coming. I don't even know if you could call what just happened a vote, as Owen Nolan completely obliterated the competition. Nolan came away with 78% of the votes cast (over 100, good job guys!), and is now the first Right Wing to be selected to the "Greatest Sharks" team.

Since Mr. Nolan was such a unanimous choice, no other Right Wing qualified for selection in the initial voting. FTF has removed Nolan from the poll, and gives you another opportunity to choose your "Greatest Sharks" team. The subsequent voting will help to determine which three RW's you deem worthy of inclusion.

If you need a statistical refresher, jump for the analysis!

Jonathan Cheechoo: Cheechoo, a native of Moose Factory, , was selected by the Sharks with the 29th overall pick in the 1998 NHL Entry Draft. Since joining the big club in the 2002-2003 season, Cheechoo has been recognized as an extremely hard worker on and off the ice. He scored a franchise record 56 goals in the 2005-2006 season en-route to winning the Maurice "Rocket" Richard trophy (awarded to the player who scores the most goals in the NHL that season). He currently holds the Sharks record for most goals in a season (56), most power play goals in a season (24), and most hat tricks in a season (5).

Pat Falloon: Drafted second overall in the 1991 NHL Entry Draft, Falloon holds the distinction of being the first player ever drafted by the San Jose Sharks. Although not as highly touted as Eric Lindross (who went first overall), Faloon would score 76 goals and add 86 assists while in . In 25 playoff games, Falloon would contribute 7 points. His 59 points as a rookie represented his career high.

Alexander Korolyuk: The Russian born Korolyuk was drafted by the Sharks in the sixth round (141st overall) of the 1994 NHL entry draft. Beginning in the 1997-1998 season, Korolyuk would play parts of six seasons in . In 296 games played with the Sharks, Korolyuk registered 142 points (62 goals). In the 2003-2004 playoffs, "Korky" would score 7 points (5 goals) in 17 games. Korolyuk was known for his amazing speed; he was considered one of the fastest skaters in the NHL. However, the allure of playing in his homeland proved too great; he left the Sharks after the lockout to continue his career in .

Jeff Odgers: Odgers, an undrafted free agent, was signed by the San Jose Sharks in 1991. Although not known as a scorer, Odgers was an elite NHL enforcer and fan favorite. In 334 games for the Sharks Odgers racked up 1001 penalty minutes, good for the franchise lead. As a member of the Sharks, he would score 48 goals and add 34 assists. He served as team captain during the 1995-1996 season.

Teemu Selanne: Traded to the Sharks in the 2000-2001 season for fan favorite Jeff Friesen, Steve Shields, and a second round pick, Selanne would play 176 games in San Jose. While in Teal, "The Finnish Flash" scored 64 goals and 67 assists during the regular season, also adding 10 points in 12 playoff games. Although his career defining moments came as a member of other teams, Selanne is arguably one of the most skilled players to ever don a Sharks uniform.