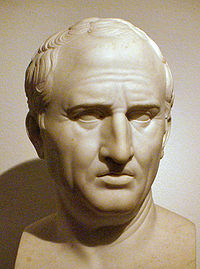 While Mr. Plank and Mr. K. were away from their sacred duties of watching Team Teal battle their opponents, the famed Roman orator and noted Sharks fan Marcus Tullius Cicero DID manage to catch tonight's game between the San Jose Sharks and the New York Rangers, and offered to us his wisdom regarding the game highlights, before closing with some pointed reminders for Sharks fans in light of the "disastrous" road trip.

But first, he offers a rebuke to both Plank and K. for their absences = We are not born for ourselves alone.

(Note to self - never mess with a man who isn't afraid to have his head cut off).

Cicero's analysis is in bold throughout.

Early on in the first period, New York Rangers defenseman Paul Mara is called for holding.  The beginnings of all things are small.

Not long after, center Blair Betts is called for high sticking.  Thus in the beginning, the world was so made that certain signs come before certain events.  The Sharks' Dan Boyle scores in the final seconds of Mara's penalty.  The Sharks still have time left on Betts' penalty.

Two Rangers penalties?  The evil implanted in man by nature spreads so imperceptibly, when the habit of wrong-doing is unchecked, that he himself can set no limit to his shamelessness.

And furthermore =  Let the punishment match the offense.  Ryane Clowe scores the Sharks' second power play goal against Henrik Lundqvist by some nifty stick work.  Genius is fostered by energy.

Left wing Nigel Dawes is called for boarding at 9:59 in the first period.  However, Nikolai Zherdev scores a shorthanded one to cut San Jose's lead in half, and put a dent in the effectiveness of their power play tonight.  Force overcome by force.  Zherdev's goal is made possible by a turnover from Ryane Clowe.  We must not say every mistake is a foolish one.

Early in the second period, Tomas Plihal went to the locker room for sustaining a lower-body injury.  Friends, though absent, are still present.  Accordingly, Plihal returned to action not long after.

Sharks captain Patrick Marleau made it 3-1, Sharks, at 6:20 of the second period.  His 17th goal of the season was the Sharks' first (and only) even-strength goal of the night.  In men of the highest character and noblest genius there is to be found an insatiable desire for honor, command, power, and glory.

Three and a half minutes later, Ryan Callahan scored an even-strength goal for the Blueshirts.  Times are bad.

The third period sees our men tired and broken, and the Blueshirts ready and willing to even the score, and then some.  While there's life, there's hope.

Furthermore = Live as brave men; and if fortune is adverse, front its blows with brave hearts.

At least Nabby followed Cicero's advice, stopping all 17 shots from the Rangers in the 3rd period, earning high praise from Teal Town for his game-saving techniques.  In Nabokov's mind, the welfare of the people is the ultimate law.

The Sharks end the Rangers' 6-game winning streak against them.  Liberty is rendered even more precious by the recollection of servitude.  While the team effort against the Rangers is not a full 60 minutes-worth like Mr. Plank and others desired, nothing quite new is perfect.

The shifts of Fortune test the reliability of friends.

We denounce with righteous indignation and dislike men who are so beguiled and demoralized by the charms of pleasure of the moment, so blinded by desire, that they cannot foresee the pain and trouble that are bound to ensue; and equal blame belongs to those who fail in their duty through weakness of will, which is the same as saying through shrinking from toil and pain.

Lastly - If  a man aspires to the highest place, it is no dishonor to him to halt at the second, or even at the third.

Sorry, Cicero ol' buddy, you've lost us completely on that last one.