Share All sharing options for: Keeping Tabs - Sucks to be a Duck... 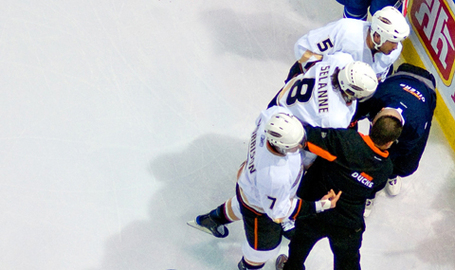 Time for yet another edition of Keeping Tabs, wherein we - you guessed it!

...Keep an eye on the rest of the Pacific Division.

In case you missed the news - "Finnish Flash" (and one-time Shark) Teemu Selanne will be out 4 to 6 weeks with a ghastly, accidentally-self-inflicted injury, which occured Friday night in Edmonton.  As he fell along the boards during the first period of his 1,100th NHL game, Selanne's right skate lacerated his left quad muscle, though it did not cut through tendons (i.e. - no surgery necessary).  Selanne leads the Ducks in goals (14), and has 27 points in all 33 games this season.

Andrew Ebbett was recalled from the AHL's Iowa Chops, who have perhaps the most convincing argument for ice girls, ever.

While we don't spit on our enemies' wounds here at FTF, we do have to say we're rather ticked that the Ducks actually beat the Oilers in the shootout, 3-2. Lousy third point... oh wait, it's our friend too!

Also - goaltender Jean-Sebastien Giguere has returned to the team after attending the memorial services for his father, who died earlier this week in Montreal.  David LeNeveu was reassigned to the Iowa Chops.

The Ducks have won 3 of their last 5 - the two losses came at the hands of the Teal and the Blue.  The Sharks don't face the Quackers again until March 15, at the Pond.

More team analysis after the jump... including something over in the Eastern Conference that we've got our eyes on...

Wait, what's this?  The Stars have 5 points in their last 3 games?  Yep - and in fact, they have 11 points out of a possible 18 since Vogue's most recognizible intern left the Big D.  There is a sizeable possibility that they will rise up the rankings to as high as 11th place in the next few days, beginning with a win against the Toronto Maple Leafs on Tuesday.

But don't forget - the team is still in 14th place, which is why the ironically timed miniseries (yes, a 3-part miniseries) "Season of Celebrations" (in honor of the '99 Cup victory) smells like a nostalgic panacea to me. "Hey, soon-to-be-ex-co-GM: your skate was in the crease!"  Betcha he never heard that one before.

While Marty Turco still has a ways to go in his save percentage (88%) and goals-against-average (3.33), take a look at the jump in offensive stats since Sean Avery's departure (just 9 games ago):

Yeah, I'm thinking it, too - can you just take back Avery, Les Jackson?

The Stars host the Sharks on December 29.

Holy Toledo - if the L.A. Kings want to secure at least an eighth seed in the Western Conference, they'll have to become road warriors to do so.  The Kings have 49 games remaining on their schedule - and only 19 of them will be at the Staples Center, where the team is 10-6-6.

Unfortunately for Gretzky's alma mater, the Kings' road record is 3-8-0... yikes.  RudyKelly is going to have another conniption fit... at least we hope so.  For what it's worth, Team Teal will do their part in dropping the Kings' road tally on February 19.

In fairness to the Kings, their suits want to make sure you're present for at least one of the January home games - by slashing ticket prices at all levels to $11.50 beginning December 26.  Get in on that, Battle of California!

Did Ilya Bryzgalov just have to stay in the Pacific Division?  The former Ducks' netminder earned his sixth NHL shutout (and first of the season) against the Columbus Blue Jackets last night... you know, the team that beat us in O.T.

Phoenix is 6-2-2 in their last 10 games... which began immediately after the Sharks' visit to Glendale on November 29.  The team is now just 3 points behind both Vancouver and Anaheim in the Western Conference (all teams having played 33 games).

Phoenix comes to San Jose for the first time this season on January 29.  The Coyotes, of course, can also boast that they are one of just 4 teams to have beaten the Sharks in regulation this season.  However, we take pride in having been the team to bounce the Desert Dogs from the playoffs the last time they snuck in... in 2002.  (Yeah, I feel a little petty for rubbing it in, too)

The Phoenix Coyotes... potentially in the playoffs again... what a perfect way to end the "Phoenix era" before being jettisoned back to Canada.  (I kid, Oh Great One, I kid...)

And now, as promised, something we've got our eye on

We'll be the first to admit it - this year's team has turned us all into cocky s.o.b.'s.  Which is why it will seem arrogant to some that we've got our eye on potential dethroners of the Sharks in their journey towards the President's Trophy.

And with that, GO SHARKS.