Share All sharing options for: Sharktistical Analysis: Even Strength Play 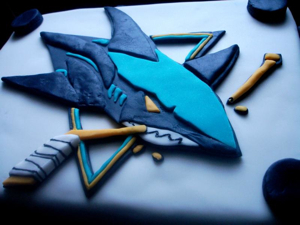 Completely unrelated, but how awesome is this cake?

The Sharks win column hasn't taken too much of a hit the last three weeks (besides that awful shellacking in Detroit), but I don't think it's a stretch to say San Jose has been less dominant in the month of December- Saturday's performance in the third period against New York being a good example.

There are many reasons for their play this month- injuries to some key players (Cheechoo, Pavelski, Roenick, Michalek), the inevitable realization that it's nearly impossible (in the modern NHL) to continue a points streak as blistering as the one we saw during the first quarter of the year, teams beginning to learn McLellan's system and finding ways to exploit it's weaknesses etc. Hey, for the sake of quoting myself (always a treat), here's a quip from the Puck Daddy roundtable:

For starters (and this probably deserves more credit to opposing teams than anything), the Sharks aren't dominating shot totals like they did at the start of the season. A lot of our offense is based on putting pucks to the net off the rush, allowing our forwards to get second stabs at rebounds. What you're seeing now is opposing teams pressuring the puck carrier a lot more at the blueline, forcing us to either dump the puck in or engage in possession battles along the sideboards. It's disrupting our flow (basically an anti-Flomax for any of the senior citizens reading), and has resulted in a number of recent games where we have been outshot.

See? I'm culturally significant. In certain circles I'm considered a Jennifer Aniston type. Cool in the 90's, fall out of favor with the general public afterwards, then get a shot of adrenaline when I pose for GQ. I'm hours away from doing a naked photo shoot people. Hours.

Naked photos aside, it's not hard to find the problem. The power play has been good (23.5% over the last nine games), and the penalty kill has been damn good. In fact, the penalty kill looks to be the underlying factor in keeping the Sharks winning during the month of December. We've allowed only three goals the last nine games (!!!) and have been killing penalties at a 91.5% clip. Those are some solid numbers.

The special teams have been doing a fine job, but it's the even strength play that has tailed off the pace set at the beginning of the year. That's troubling for a couple of reasons. Once you reach the playoffs it becomes a lot harder to rely on the power play to get wins as the games are generally called a lot tighter; what was a penalty in December may get overlooked in May. This isn't to say that these units are unimportant- they may be even more of an asset considering the rarity of 5 v 4 situations, but the fact that they are less prevalent makes them less of a "crutch" to fall back on. Secondly, the majority of time spent on the ice is played at even strength. The Sharks need to generate scoring opportunities 5 on 5, which is something they've had difficulty doing. Hence the difficulty winning games.

What follows is a look at the last 33 games broken into 8 game periods. For the sake of this study I threw out the Detroit game- getting outscored by six goals at even strength is going to paint a pretty dire picture, one that probably isn't very indicative of the Sharks play over this last eight-game span. 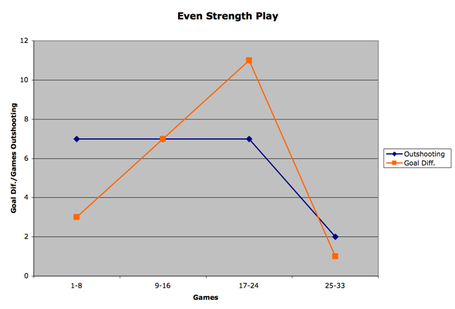 The blue line (outshooting) measures how many games the Sharks outshot their opponent at even strength. Since each "period" is broken into eight game segments, the maximum number that could be reached would be eight. The orange line is even-strength goal differential (EV GF minus EV GA).

What we're seeing here is a huge drop in even strength numbers for the San Jose Sharks on a game by game basis- less scoring opportunities and less goals scored.

If this trend continues, and one out of the three other areas (goaltending, power play, penalty kill) hits a skid, there could be some problems going forward. It's not time to freak out yet, but if the Sharks don't improve their even-strength numbers we could be due for a bit of a slide.

With all of this in mind, we have been battling some key injuries this month. Pavelski and Cheech are back, and will be probably be close to 100% by the time this month ends. Roenick and Mitchell are still a few weeks out, but their eventual presence on the ice will also improve the roster.

Even strength play is a good indicator of sustained success. Here's to hoping the Sharks return to their pre-December levels soon.