The Night Before Christmas (Eve)

Share All sharing options for: The Night Before Christmas (Eve)

My pops and I headed out to The Tank tonight to scalp some tickets for the game. I originally wasn't going to go (Stub Hub prices were through the roof as usual), but figured a little back-alley deal was in our best interest. 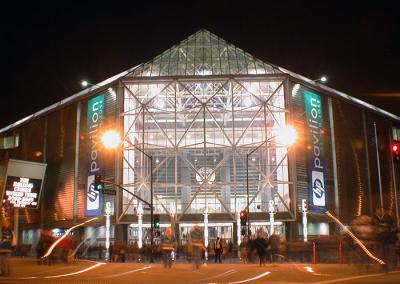 'Twas the night before Christmas Eve, and all through the streets

Tickets were in everyones pockets, handled with care

While a father and son hoped to join the throngs there

The Vancouver faithful was confident, all smug in their beds

While visions of Mats Sundin danced in their heads;

Pops in his pullover, and I in my jersey

When out on West Santa Clara Street, there arose such a clatter

A man selling tickets, "Come one come all, I need to sell them faster!"

Away to the man, we jumped like a flash

Like Patty Marleau streaking down the ice, the other denizens we flew past

The moon on the pavement, a drunk on the floor

We purchased two tickets, not knowing what was in store

One, two, three, the Sharks goals came and came

And soon as you knew it, the announcement was proclaimed

So raise your brews and put on your sunglasses!

The Sharks are hot, you'll need the protection

Because to avert your eyes would be a shame, such misdirection!"

We sprang out our seats, cheers and whistles abound

Such a unified, glorious sound

And as the game ended, in culmination of a perfect night

The  PA announcer yelled, "Happy pizza to all, and thank you for watching the best team this town has ever iced!"