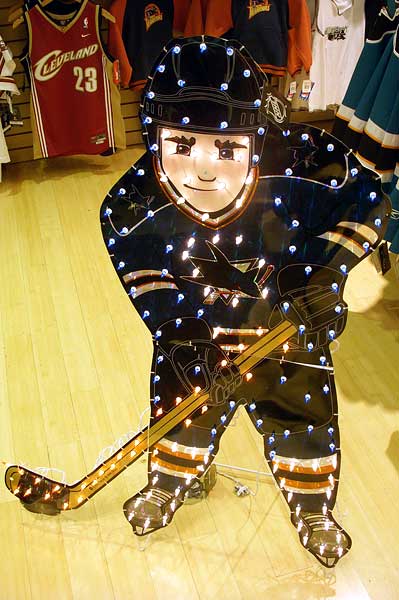 First off, FTF would like to wish everyone a very Merry Christmas/Happy Hanukkah/Kickin' Kwanzaa/Festive Festivus. It's been a privilege getting to know ya'll over the last few months; we hope to continue to provide you with all the Sharks talk you can handle for many holidays to come.

We know how awkward the holidays can be. Therefore, we put some work into an article that will give you an excuse to escape from that creepy aunt who gives you hand knit mittens or the hippy cousin who burns you reggae CD's. So throw those bad ties in the closet, steal some crescent rolls from the oven, and set up shop in front of your computer. It's FTF time baby.

This year, FTF decided to dish out some Christmas gifts. No, not to you... to some of the Sharks players. Don't worry, the gifts are fake (we're po, yo). Some are funny, some are sentimental, and some are unnecessarily harsh. If you'd like to give some gifts too, throw them in the comments section, and we'll be sure to fake-mail the fake-presents to the Sharks. So make the jump for our very first FTF Christmas List.

Because it wouldn't be any fun to dish out all the gifts ourselves, we left some of the gift giving up to you. Players like Nabokov, Lukowich, and Michalek all need some Christmas Lovin'. So wrap up your suggestions in the comments (no newspaper please, that's just tacky). I'm assuming you'd give that lovin' in gift form, or else you might get saddled with a restraining order. To each their own during the holidays.
So, from Mr. Plank, Mr. K, and me, have a very happy holiday season.
And, as always... Go Sharks!