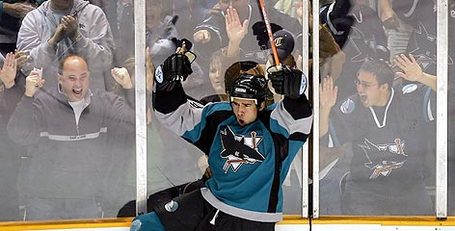 When you look at it, this was really another landslide. The Rocket Richard winner came away with the second RW spot on the roster without any real discussion. Say what you will about Cheech this season, but he's been a star in San Jose and deserves to play a role on this team.

So, on to the next vote. You guys know what to do. This will be the last RW vote, as this poll will determine lines 3 and 4. Remember, the player chosen doesn't necessarily have to be the most skilled, it's up to interpretation. The team is, however, intended to include the "Greatest Sharks", so tenure should be considered as part of the equation.

Analysis after the jump, if you need a reminder. Happy voting!

Pat Falloon: Drafted second overall in the 1991 NHL Entry Draft, Falloon holds the distinction of being the first player ever drafted by the San Jose Sharks. Although not as highly touted as Eric Lindross (who went first overall), Faloon would score 76 goals and add 86 assists while in . In 25 playoff games, Falloon would contribute 7 points. His 59 points as a rookie represented his career high.

Alexander Korolyuk: The Russian born Korolyuk was drafted by the Sharks in the sixth round (141st overall) of the 1994 NHL entry draft. Beginning in the 1997-1998 season, Korolyuk would play parts of six seasons in . In 296 games played with the Sharks, Korolyuk registered 142 points (62 goals). In the 2003-2004 playoffs, "Korky" would score 7 points (5 goals) in 17 games. Korolyuk was known for his amazing speed; he was considered one of the fastest skaters in the NHL. However, the allure of playing in his homeland proved too great; he left the Sharks after the lockout to continue his career in .

Jeff Odgers: Odgers, an undrafted free agent, was signed by the San Jose Sharks in 1991. Although not known as a scorer, Odgers was an elite NHL enforcer and fan favorite. In 334 games for the Sharks Odgers racked up 1001 penalty minutes, good for the franchise lead. As a member of the Sharks, he would score 48 goals and add 34 assists. He served as team captain during the 1995-1996 season.

Teemu Selanne: Traded to the Sharks in the 2000-2001 season for fan favorite Jeff Friesen, Steve Shields, and a second round pick, Selanne would play 176 games in San Jose. While in Teal, "The Finnish Flash" scored 64 goals and 67 assists during the regular season, also adding 10 points in 12 playoff games. Although his career defining moments came as a member of other teams, Selanne is arguably one of the most skilled players to ever don a Sharks uniform.