Oh how the mighty have fallen. Last in the division behind the Kings and Coyotes? It makes me all giddy inside.

But have the early season trials and tribulations subsided with the passing of one Sean Avery? Difficult to say. Marty Turco has continued to, well, stink like used car salesmen. But the Stars have been on a tear (shedding not a tear) during the month of December, going 7-3-1 while scoring 36 goals in that span.

The loss of Brenden Morrow (reportedly out for the season with a knee injury) is going to hurt them down the stretch, but if Turco can somehow get his numbers back to his career average during the last half of the year, I would not be surprised if they slide into a lower seed (6 or 7) by the time it's all through. This is one of those teams that could make a lot of people nervous in a seven game series, especially if Turco gets hot a la April/May of last season. The scariest thing about the whole situation? Morrow is a warrior, and although current prognosis says six months, don't rule out a return just yet. Flame me like Eklund, but that's one prediction that could make me out to be a prophet.

With the Sharks playing like the Wilson years lately (breaking records one night, throwing up stinkers the next), this game should be exciting. For the Stars, it will be an opportunity to prove to themselves that they still have what it takes to run with the big boys. For the Sharks, it's a chance to plug up some leaks that have impeded their current navigation of the regular season seas.

And remember that no matter the outcome, at least the Sharks website doesn't inundate you with shoddy advertisements: 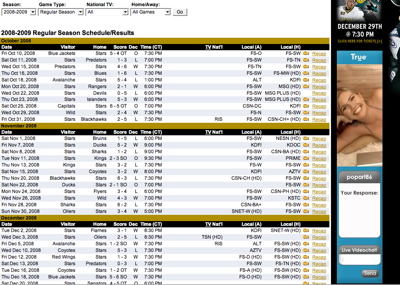 Prediction: Sharks win 5-4. Goals by Marleau (x2), Pavelski, Boyle and Goc. Mike Ribeiro is a corn-filled turd. That's less of a prediction, more of an observation.