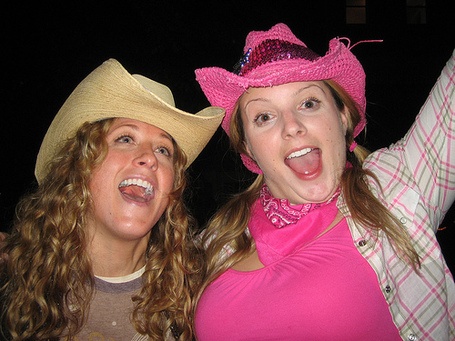 YEEEEEE HAAAAAAW!!!!!  Everything feels bigger in Texas - including SIXTY POINTS!

Hey, someone had to break Dallas' point streak, right?

Couple of firsts tonight - penalty shot (Turco blocked Patty, no biggie), and our first empty-netter.  (Trivia - which teams still don't have one?)

OH YEAH - and we had to post THREE DIFFERENT THREADS because we had a grand total of 965 comments (and presumably growing).  Next time kiddies, we'll crack 1,000.  Take THAT, St. Louis Game Time!  (hey, 565 is still respectable - which is why we'll see you on March 12).

Jonathan Cheechoo stepped in on the first line, replacing Devin Setoguchi, who is mourning the loss of his grandmother.

Fabian Brunnstrom was also out of the lineup for his team.  However, Jere Lehtinen WAS in the lineup tonight for his first appearance against San Jose this season.  Additionally, Stephane Robidas was wearing his cage again... some things never change.