Sharktistical Analysis: Neither Grier nor there

Share All sharing options for: Sharktistical Analysis: Neither Grier nor there 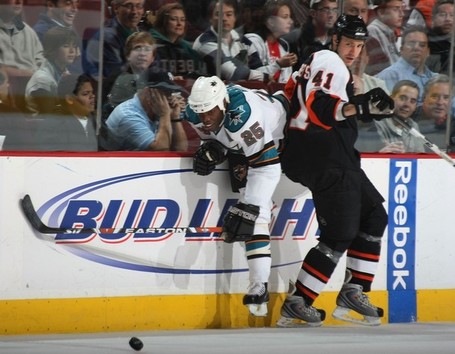 Recently, no one (besides me) has taken more crap here at FTF than Mike Grier. Problems with Grier include empty net misses, bad passes, bad positioning, and poor offensive awareness. Grier has gotten a truckload of criticism around these parts lately.

However, I don't want to just keep ragging on the guy. I like Grier. He's been a pretty solid player for us over the years and is one of my favorite Sharks. Therefore, I decided to do a little digging to see how Grier is really doing, statistically.

Basic Stats:  Grier's 14 points make him 11th on the Sharks in scoring, not too shabby. He's currently on ice for about 14 minutes a game, and plays about 2 minutes of that game time on the PK. On the surface, Grier looks like a pretty decent player.

Advanced Stats: Thanks to behindthenet.com, stat nerds like me are able to dig deeper into a players overall performance. Although Grier's basic stats look O.K., his advanced stats tell a somewhat different story.

Grier's Corsi Number sits at 0.8, which is third lowest on the Sharks. (Only McGinn and Armstrong have a lower Corsi number, partly due to their relatively low ice time and line assignment) For those of you unfamiliar with Corsi numbers, an explanation can be found here.

Grier has also become less physical this year, as his propensity for shot blocking has dropped considerably. Grier is currently blocking 1.4 shots every 60 minutes, down half a shot from last year. The league average sits at about 2.5 blocked shots per game.

Conclusion: It's kind of a mixed bag for Grier. Although he's still scoring and has been playing good defense, he's not generating much offense (according to the Corsi metric). He has definitely benefited from the occasional playing time on lines 1 and 2, and is getting alot of help from his defense and the goalies.

Although it's tough for me to say, I believe Grier should be moved down to line 4. He's so big and so physical; I think he would be a bigger asset in a checking/stopper type of role. I still think he's a good player, but I believe his overall skill set would play better on a lower line. I feel like someone with better hands (such as McGinn or Mitchell, when he returns) would fare better on line 3. Grier would still get his opportunities to score; playing on a line with Roenick and Shelley would better fit his style. He's fared better this year, statistically speaking, in the defensive stopper type role. He's a drain on offense.

Don't get me wrong, I'd rather have Grier than most other middle tier RW's. He just shouldn't be one of our top scoring options.

Feel free to disagree with me on this one... the stats can be used to argue either case.