Share All sharing options for: Owen Nolan and The Gooch return to action (with a goal apiece) to close 2008; Sharks lose to Wild 3-2 in O.T. 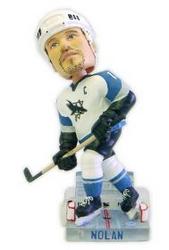 Doesn't he look better in teal?

He's baaaaaaack.  And we're not talking about Setoguchi here (though we're glad he's back too - got a goal tonight!).

Former Nordique / Avalanche / SHARKS captain / Maple Leaf / Coyote / Flame, and current Wild child Owen Nolan returned to action tonight against his old team, and scored the first goal of the night.  Jacques Lemaire reported that Nolan was not 100%, but had asked the Minnesota coach if he could play that night.  Awww, how sweet of you, Owen...

Unfortunately, the Minnesota Wild beat the Sharks in overtime, 3-2 in the final game of 2008 for both clubs.  On the bright side, the Sharks forced overtime with just 23.6 seconds left, securing at least a precious OTL point.  Read on for more.

The Sharks have 61 points, one more than the Boston Bruins, which allows them to keep the title of best team in the NHL going into 2009.

From all of us here at Fear the Fin, Happy New Year, don't drive if you've been drinking, and GO SHARKS.