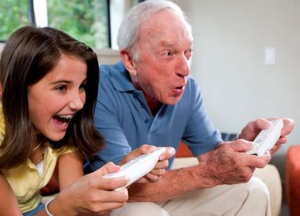 Gramps and I playing a rousing game of Tetris.

If you're like me, you like to spend Sundays eating Cheetos and laying around like the sea lions at Pier 39. Except I avoid the sun- everybody knows that stuff is detrimental to your social life. The internets is where it's at kids. You don't even need to leave your couch to find a date. Sure you urinate all over yourself seven minutes before leaving the house and decide not to go, but hell, at least you tried. One keystroke forward, two steps back. Or something like that.

The weekends are videogame time. Solely. Bathing is third on the list behind jumping jacks (and with a heart healthy as Dick Cheney's, that never gets accomplished).

There are two NHL videogames available for the 08-09 season. But where do the two contenders fall in this metaphorical match for gaming gold? Let's have a quick look see (my created team is all tied up in the third period chumps, no time for funny business):

I haven't played NHL 2K9, and I have no intention to do so. To me, this is basically more one-sided than Mankind vs. The Undertaker at 1998's King of The Ring**.

If I'm wrong (doubtful) then attempt to woo me. I may be opinionated but I'm generally open to other ideas.

Also, feel free to share any gaming stories of your own if you're comfortable with people laughing at you; Iord knows I've been down that road before.

** If you think wrestling is "fake" then watch that. I don't care if the storyline is scripted, those guys are crazy athletic, and probably crazy as hell too. When you watch part 2 you will notice Mick Foley (who goes by the nomiker of Mankind in that specific match) get chokeslammed through the roof of the cage. Not planned. The ceiling on the cage broke with his impact, and he legitimately was knocked out when he hit the canvas. Any other human would have been dead.

Another note- he gets slammed onto tacks to end the match. Afterwards, the dude goes up to Undertaker backstage. Obviously a little worse for wear he says "Hey Mark (Undertaker's real name), did we ever end up using those thumbtacks?" At this point about 50 of them are embedded in his arm.

That's what legends are made of.