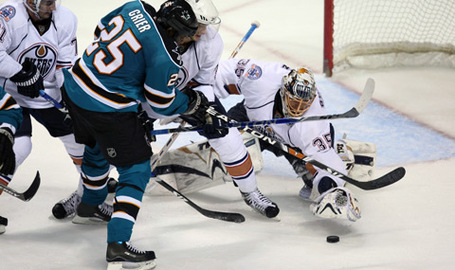 Leave it to Dwayne Roloson to rain on the Sharks' parade... twice this year.

After ending the Sharks win streak in the shootout in March 2008, Roloson came up big tonight for the Edmonton Oilers, stopping 41 of 43 shots en route to a 3-2 overtime victory over San Jose.

The San Jose Sharks, who started the game with the third line of Tomas Plihal, Marcel Goc and Mike Grier, would strike rapidly - and repeatedly - throughout the period, beginning at 1:20.  Though there was almost a three minute lull between the Sharks' first and second shots on goal, a flurry would occur within the next 3 and a half minutes, bringing the shots total to 8-0, San Jose.  However, Roloson stubbornly held off each robust effort with the skill he has previously demonstrated against San Jose, dating especially to the 2006 Semifinals, but also including his 48 save effort on March 16.

It was at 8:50 that Edmonton's #1 line of Dustin Penner-Shawn Horcoff-Ales Hemsky would record the team's first shot on goal, which would be their ONLY shot for the first 25 minutes of the game.

Unfortunately, it would put the Oilers on the scoreboard first.

A turnover by Devin Setoguchi in the neutral zone proved costly to San Jose, as Ales Hemsky was set up to fire from the slot.  Dustin Penner and Tom Gilbert assisted.

The Sharks were undeterred, and peppered Roloson for the remainder of the period.  Roloson had a combination of skill and luck as he stopped a barrage around 12:49, when the shots were 13-1.  After stopping a couple of attempts, the puck went wide off of the post, preserving the Edmonton lead.

Jeremy Roenick had a big hit on the returning Ladislav Smid at the point around 16 minutes into the period.  Smid returned to the Oilers lineup after missing 7 games from a Raffi Torres-induced concussion.

Marcel Goc, the #3 star of the night despite no points, nicely set up Mike Grier, who unfortunately went wide, with 3 minutes to go.  The Sharks were still down a goal despite keeping Edmonton to just one shot, while San Jose had 15 with nothing to show for it.

At 17:29, Dustin Penner earned a double minor penalty for high sticking - the first penalty of the period.  As if the Sharks weren't presented with opportunities already, this seemed like a game-tying situation.

The Sharks did tie the game, actually - but not before the Oilers killed more than two minutes of the penalty by clearing the puck repeatedly, to the point that San Jose was inexplicably without a shot on goal during the man advantage.

Finally, in a parody of the shooting drought that Edmonton faced the entire period, the first shot on goal of the power play, almost 2 and a half minutes into the 5-on-4, went in with just 6 seconds left in the period.  The goal was initially credited to Joe Pavelski on what looked like a no-look pass from Dan Boyle, but upon further review, it was determined that Boyle actually made a no-look goal (San Jose's 32nd power play goal of the season).  Thus, Milan Michalek and Pavelski earned the assists, while Boyle's goal tallies for the season entered the double digit realm.

At 1:36, Christian Ehrhoff was called for hooking, and Edmonton began their first man advantage of the night.  Neither team was able to record a shot on goal up to this point, or during the Oilers' power play.  Just after San Jose killed the penalty, Erik Cole was called for interference, at 3:49.  Both teams would record shots during the Sharks 5-on-4, with the shot totals being raised to 19-2 upon returning to even strength, thanks to Joe Pavelski and Edmonton's Liam Reddox.

San Jose would finally be rewarded with a lead for all their shots at 8:01, when Jeremy Roenick patiently waited at the corner of Roloson's net until the puck came to him following yet another San Jose attack, begun (amazingly!) by Alexei Semenov.  J.R.'s 3rd of the year was the 512th of his career, tying "the" Buffalo Sabre Gilbert Perrault for 35th on the NHL list of lifetime goals.  Tom Cavanagh earned his second NHL assist, and first this season; Jody Shelley also notched a point.

San Jose would keep up the shots after having further scoring chances.  The shot total was 28 to 4 when Devin Setoguchi was called for hooking.  Worth noting - the penalty was delayed, and San Jose was insipid at touching the puck while six Oilers circled in the Sharks' end.  The power play finally began at 12:38.

Edmonton managed to gather two shots during the power play, bringing the shots to 30-6 before the penalty expired without damage done to Team Teal.

At 17:32, Rob Blake was called for hooking.  During the penalty kill, Milan Michalek broke his stick - and didn't drop it quickly enough, which drew another penalty.  Before the Oilers could go on the 5-on-3, Sheldon Souray fired a shot that was deflected off of Dustin Penner's stick, tying the game at 2, at 17:49.

Unfortunately for Evgeni Nabokov, who was not really at fault for either Oiler goal of the evening, he had let through 2 goals on just 9 shots.  The period would end with the score tied, despite a shot ratio of 31-10, heavily favoring San Jose.  Marcel Goc did have a fantastic shorthanded opportunity with just over a minute remaining, but Roloson robbed Team Teal yet again.

Edmonton managed to sneak in the first shot on goal of the period, but the Sharks fired back with two before 3 minutes had elapsed.  Shortly thereafter, Rob Schremp accidentally pushed over Roloson, who got up without his stick just in time to - incredibly - stop Patrick Marleau's shot, the 34th of the night for San Jose.

Not long after, Joe Thornton's shot hit Roloson in the facemask - within a few moments, a flurry of activity occurred at Edmonton's net, increasing the shot total to 39-13.  Roloson actually lost his mask during this time, as if Darth Vadar were revealing his true identity to the enemy.

Around 11 minutes into the period, San Jose would break their own NHL record for most 40-plus shots-on-goal games in a season, a record they set (oh the irony!) with their 57 shot volley against Nashville on November 11, and improved upon since.  The record now stands at 11 games.

Kyle Brodziak (more on him in a moment) went off on a breakaway not long after, but was mercifully stopped by Christian Ehrhoff before damage could be done.

At 15:03, Joe Thornton was upended at the point by Tom Gilbert, who was immediately called for kneeling.  Entering the power play, San Jose was ahead 42-14 in shots.  The penalty was killed with just 1 shot added to San Jose's tally.

Teal Town waited with baited breath as the clock expired, sending the game into overtime.  Shots during regulation - 43-15, or 12-5 for the period.

Perhaps it's fitting that the HP Pavilion puts on AC/DC's "Hell's Bells" to signal the sudden death overtime - because that's approximately the expression that Sharks fans were muttering after 160 seconds.

Kyle Brodziak would record the only two shots of overtime - and the game-winner.

Patrick Marleau was called for hooking Gilbert Brule 1:10 into sudden death, and Brodziak was set up from the circle by Shawn Horcoff.  Tom Gilbert got the extra assist on the goal, which went in off of Christian Ehrhoff's skate.

Both Jonathan Cheechoo and Brad Lukowich were out of the lineup for San Jose tonight.  Sam Gagner (out since December 3rd) is the most recent addition to Edmonton's injury list - he joins Robert Nilsson, Fernando Pisani, and Steve MacIntyre.

Marc-Edouard Vlasic led all players in ice time (again) with 26:42.  He was unfortunately a minus-one tonight.

Joe Pavelski led all players with 6 shots on goal.  Ales Hemsky led Edmonton with 4, including his goal.

Gilbert Brule played in his first game as an Oiler tonight - he was on the ice for 8:41.

As for Edmonton - they have temporarily secured the 9th spot in the Western Conference, after being 13th just yesterday afternoon before their shootout victory over the L.A. Kings.

The Sharks have a lengthy rest to plot the destruction of the Anaheim Ducks on December 11.  In the meantime, join the hundreds of people trying in vain to get Ryane Clowe's autograph at the Sharks Store on December 10, from 4:30 to 6:00pm.

May the force be with us - GO SHARKS.