Share All sharing options for: Sharktistical Analysis: Stat-king the Pads

I should be arrested. Horrible pun usage is a major offense in blogdom, but I'll throw caution to the wind... the e-Police are probably out catching those "Type in all Caps" double offenders. Look out idunno723, they're on to you.

Earlier this week, while discussing the struggles of Kiprusoff, some users politely asked me to do a Sharktistical piece on goalies.

How could I say no to you guys? I'm a sucker for begging.

The great thing about this piece is that the numbers speak for themselves. I compared the GAA and Save % of Nabokov, Toskala, Kiprusoff, and Boucher. Here's what I came up with. 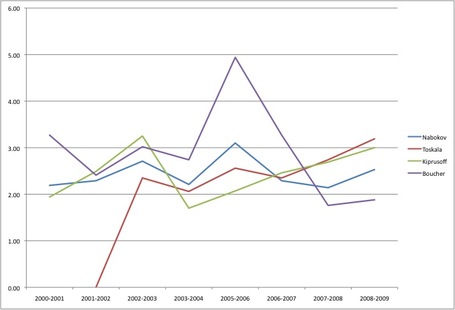 This graph displays the goalie's GAA over the past 8 seasons. Here's what I took from the data:

1.  Man, Boucher has had a rocky few seasons. His GAA has been consistently above the other Sharks goalies... until the last two seasons. Has Boucher turned his career around? Is he the best goalie of the four?

Probably not. I'm attributing his better numbers to the fact that he is on a better team now (the Sharks) than he was in seasons past. He's played well, no question, but it's impossible to ignore how much changing scenery has helped him. He's also helped by the relatively low number of games he's had to start; Boucher has had plenty of rest backing up one of the most durable goalies in the NHL.

2. What has happened to Boucher has also happened to Toskala... only the other way around. Statistically speaking, Toskala has gone downhill the past two seasons. It's a pretty violent change for Toskala; if the season were to end today, this would be his first year with a GAA over 3.00 (and he's only been a starter for two).

3. Kiprusoff's GAA has slowly increased since the season in which he allowed only 1.70 goals per game. At 32, he's not getting any younger; it's hard to imagine him becoming the Kiprusoff of old again.

4. Nabby may not have the lowest GAA each season, but he's pretty consistent. He's only had a GAA over 3.00 once in the past eight seasons while playing more than any of the other goalies. He's not going to give you the prettiest looking stat lines, but you can count on him to keep your team in the hunt all season.

Like I said above, I also looked at the save percentage stat since some people have griped about GAA in the past. Here's what the trends look like: 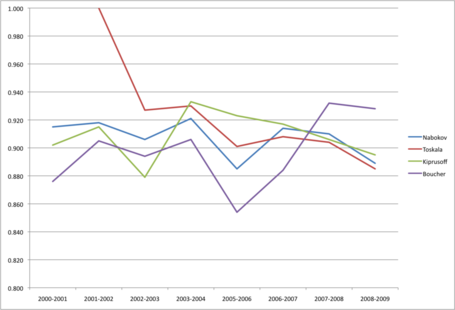 It tells pretty much the same story, but there are some interesting things here that you didn't see on the other graph.

1. Nabokov's save % so far this year is close to his career low. Ouch.

2. As impressive as Kipper's 2003-2004 season was, it's looking like it was more of an anomaly than anything else. His save percentage has regressed recently and is now more in line with his career numbers.

What do you take from all this? First and foremost, it's pretty evident that the quality of your team helps to determine how good of a goalie you will be. It's no coincidence that Boucher and Toskala have better stat lines during the time they were with San Jose. Although I applaud many of Wilson's moves, he doesn't have a sixth sense to know when a goalie is about to get bad or good... but he did build the team, so give him credit for that.

Second, I think we can stop considering Kiprusoff as an elite goalie. He's very good, and can be great at times. However, he's definitely losing steam as his career progresses. If his decline continues, Mr. Keenan might have to move on and send Kipper off to pasture.

I know this was pretty bare bones stuff, but I'll take a closer look sometime next week.