With the relatively successful Canadian road trip over, now is an excellent time to look at some current trends facing the team right now. There's a lot of graphs, so this isn't necessarily for the poetically inclined. However, your humble wordsmith will expound on the numbers. Majestically, I may add.

Join us after the jump for some of that Sharktistical Analysis that makes you wish the ol' mama birds were around here more often.

[Editor's Note]: We will be discluding the Vancouver game due to the fact that ten-game intervals are convenient, and more representative when examining the team's performance in blocks. It shouldn't be too difficult to mentally adjust for last night's game- if it is, pop me an email and I will give you what you need. 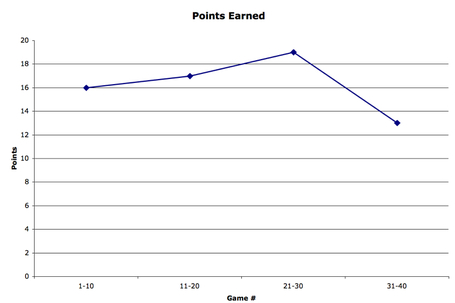 Takeaways: Not much here other than the obvious- the Sharks are one of the league's elite teams, and their record shows as much.

As the majority of you can see (for the rest expect the braille version on Tuesday), San Jose's point production has taken a dive in the last ten games. That alone wouldn't be troubling, but as we will touch on later, it isn't a case of the Sharks getting bad bounces or running up against a set of hot goaltenders. It's a variety of things that add up to the general state of the Sharks.

Fancy that. I guess that's why they call it a "team." 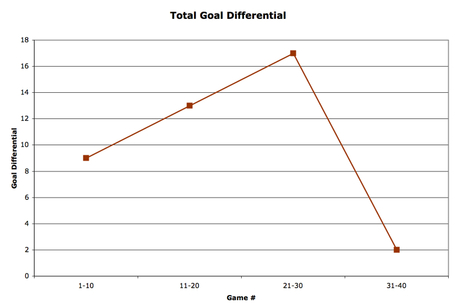 Takeaways: San Jose has been in the top five in goals per game all year, but as we can see, there has been a steep decline as of late. Reasons are many- injuries to some key players (along with getting back to 100% after returning to the ice), reaching that inevitable period during the season where the team is going to play poorly, and a lack of 60-minute efforts. All of those compound into what you see here.

The one consistent has been the Sharks ability to keep pucks out of the net. With all of the fireworks on the offensive side of the ice, the Sharks impressive defense (goaltending most certainly included) tends to get overlooked. The biggest positive in the last ten or so games has been consistency in this department, and as the old proverb states, "Defense wins championships."

The offense will (most likely, cross your fingers) come around, and has showed good signs of doing just that in the last two games. This will further decrease the time spent in the "bad" part of the ice. As long as the Sharks can keep up their attentiveness on defense, they will succeed. 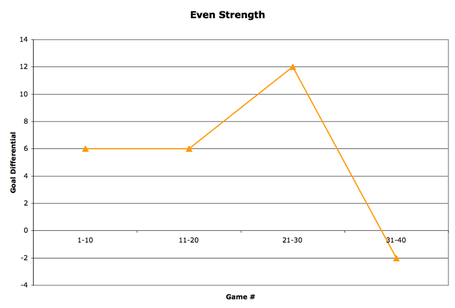 Takeaways: It's imperative that the Sharks improve in this category. The majority of each game is spent at even-strength. We've all seen referees put the whistles in their pockets once the postseason begins.

I'll address these issues below. 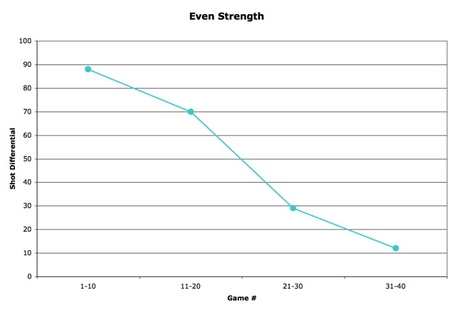 And for the sake of conversation: 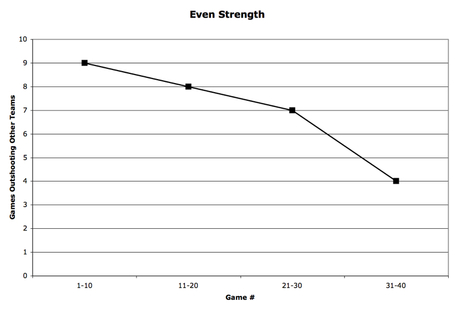 1) No longer are teams sitting back and letting the Sharks dictate the play. Instead, opposing coaches are sending two men in on the forecheck, leaving the center to cheat puck side and break up any stretch pass that would allow the Sharks to generate odd-man opportunities. San Jose's forwards have not been moving their feet in the zone and creating passing lanes; last year's formula of stagnant skating seems to have befallen the team, the one area where the Sharks are guaranteed to have the upper hand every single night. That is, of course, if they are willing to work at it.

2) When coming through the neutral zone, teams are standing up our forwards at the blue line. For the sake of time constraints, I'm going to paraphrase my previous article on Puck Daddy for the upteenth time. Not because I love quoting myself (oh, but I do); it is because nothing has changed since then.

.....the Sharks aren't dominating shot totals like they did at the start of the season. A lot of our offense is based on putting pucks to the net off the rush, allowing our forwards to get second stabs at rebounds. What you're seeing now is opposing teams pressuring the puck carrier a lot more at the blueline, forcing us to either dump the puck in or engage in possession battles along the sideboards. It's disrupting our flow.....and has resulted in a number of recent games where we have been outshot.

A possible solution was layed out yesterday, and while it won't completely revitalize the offense, it will open up a lot more space to work along with taking advantage of our team speed.

3) The need to get more physical. Let's get physical, let me see those bodies talk*. The Sharks have been losing battles in the corners for what seems like years now and the grit we witnessed the first quarter of the year (see: Anaheim, first game) has all but dissipated. Man, it sure did look good. And ya know what? We were winning games. Lots of them.

* I am deeply sorry for that.

The Sharks ice one of the biggest squads in the league; yet, we seem more apt to play a finesse game. That will work against lower-tiered teams, but once we face the elite, that size needs to be taken advantage of.

I'll be back later tonight with a look at the special teams.