Share All sharing options for: Happy birthday to me... Sharks beat Canucks, 4-2 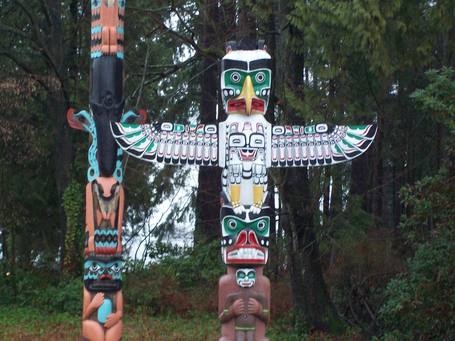 VANCOUVER, British Columbia (FTF... not AP) - The San Jose Sharks finished their 3-game Canadian road trip with a 4-2 win over the Vancouver Canucks tonight at the General Motors Place, home of charmingly belligerent fans.  I was heckled mercilessly all night ("Hey Pavelski!" - my jersey became my identity), but treated to a beer on my birthday (Rickard's, courtesy of a certain Richard)... before being booed by the entire concourse.  Outstanding show of solidarity against me - I tipped my hat to them and bowed... which did not stop the booing in the slightest.  But I digress.

Actually, in lieu of transcribing the detailed notes that I took during the game, I'm going to play the "lazy birthday" card and instead refer you to this outstanding game wrap, which (unlike some other AP game wraps) is a gem.  Honestly, I cannot do better myself - so I won't try.  But by the same token, there are a few observations I can emphasize, plus some photos I can share, after the jump. 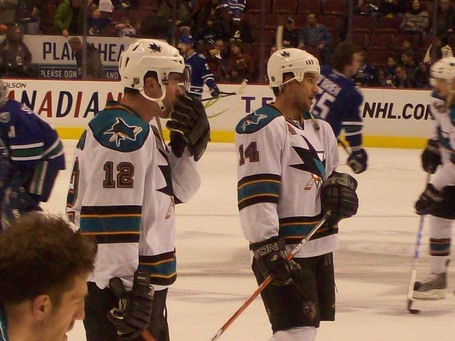 Fear the Fin Contest = Write the best caption for this photo.  Winner gets... it posted.

Marleau: "Why do my gloves smell so weird?"

Cheech: "Sorry, I used them to barbeque some moose meat this afternoon." 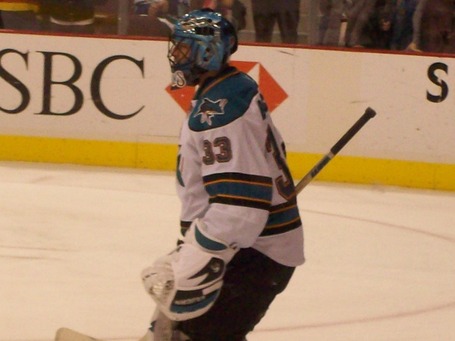 The biggest point to emphasize tonight is that Brian Boucher is... amazing.  It is downright appalling to my sentiments that he was not a star of the night, since the majority of his 24 stops were highlight reel-worthy.  Pad saves, followed by diving glove saves on the rebound shot; a quick turnaround to grab the puck from crossing the line after it slipped past; more glove saves on shots from the rebound... the man was a beast in the net tonight, and our saving grace.

Make no mistake - had a lesser man been in net (and no, I don't mean Nabokov), the Canucks would have had their revenge for that 5-0 thrashing last month.

For the record, Boucher is 9-1-1 this season.  Stupid Phoenix and Nashville... 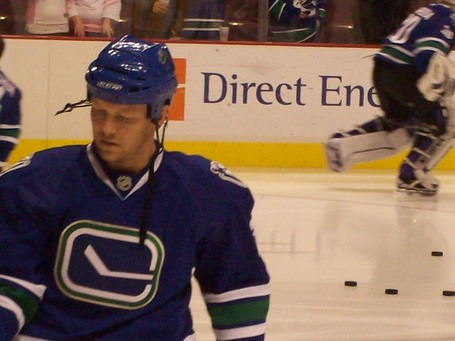 "Guess I'd better do something for those millions..."

Another point - Mats Sundin DID NOT deserve to be the third star of the night.  I know, I know - The Bald One got his first goal as a Canuck after Brian Boucher was out of position.  Yes, he had a better game tonight than his first two (4 shots tonight) - but his high sticking penalty in the third period led to the game winning goal by Patrick Marleau (with just 2 seconds left in the man advantage), and he was on the ice for Mike Grier's goal (i.e. a minus-one for the night).

Still, I was tickled to be a witness to the latest footnote in Mats Sundin's career... especially since the footnote also mentions that his Canucks lost the game.

It was also good to see Steve Bernier and Rob Davison again... even if Bernier didn't seem too happy with Christian Ehrhoff later in the game. 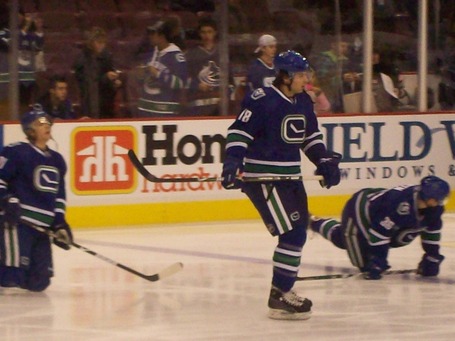 Ah, the memories... of nagging inconsistency.  Still love ya, Stevie.

Finally, shoutouts to Richard (for the beer), and Kevin and Brendan (definitely Kevin, I think Brendan was his son's name) for the company.  BIG fist-bump to my Great Aunt Kathy for making the trek from Seattle with me, and taking my extra ticket.   Thanks to some guy on Craigslist for selling me the tickets for face value back in October, long before Sundin was a blip on Canucks fans' radar (helloooooo 100% markup). 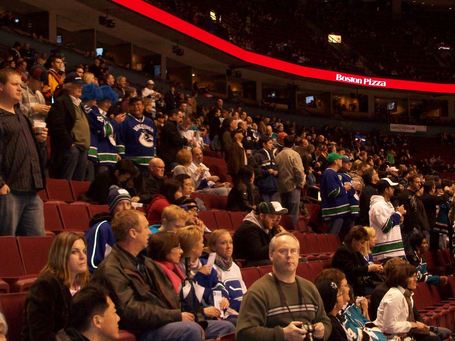 "We paid more than yoooooouuuuuu..."

Lastly, thanks for Fear the Fin's readers for the birthday wishes and greetings, and thanks to our Men in Teal for making my birthday extra special.