Defenseman Derek Joslin called up from Worcester; Alexei Semenov to potentially play as a FORWARD?!?

Share All sharing options for: Defenseman Derek Joslin called up from Worcester; Alexei Semenov to potentially play as a FORWARD?!? 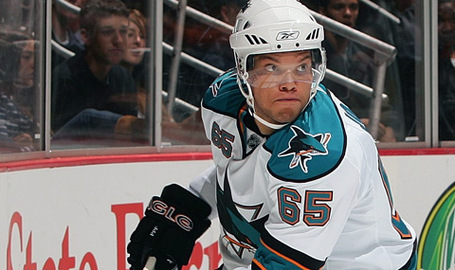 For the official word on Derek Joslin's reassignment (as well as that of Jamie McGinn), read HERE.

Bear in mind - Douglas Murray has skated with the team, so Joslin might not necessarily be in in the lineup on Saturday... but considering the caution that we've seen from McLellan and co. in the past few weeks regarding premature returns to the ice, it's not at all unlikely that Derek will see his first NHL game against the New York Islanders.

Remember - Murray did not play against Minnesota on Dec. 31, after being injured in the third period against Dallas on Dec. 29.  He did return to the ice in that game, however.

UPDATE (from elsewhere on sjsharks.com)

Douglas Murray skated the entire practice on Friday and could be ready to go.

"Doug may be ready to go tomorrow and was better today that we expected," said McLellan.

Even with that, the recall of Derek Joslin may not have been in vain.

"Derek may get some game time," said McLellan. "Semenov may get to play a little forward."

You be the judge of the semantics - does McLellan mean, "Semenov may get to play going forward in our schedule," or does he actually mean he'll be playing AS A FORWARD?  Egad...

UPDATE = Holy crap, McLellan DOES mean that Semenov might play as a forward.  Thanks to *mymclife* in the comments section for the link to David Pollak, who confirms that Todd McLellan's ambiguous choice of words means what we feared it might.

Thanks again to *mymclife* for finding a Star Wars video that expresses what many are no doubt thinking...