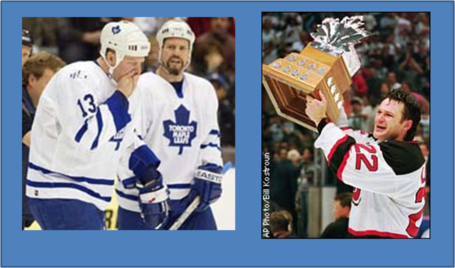 For the sake of comparison, I'd like to look briefly at the first "comeback" games of both Claude Lemieux (San Jose) and Mats Sundin (Vancouver).  The two elder statesmen (they must hate hearing that) met tonight at the HP Pavilion in San Jose, where the Sharks tied the game in the waning seconds, before winning in overtime (to be discussed on this site soon ah here's a link to a real review).

Sundin was playing in his 7th game as a Vancouver Canuck -  the team is now 1-4-2 with him, by the way.  Of course, Lemieux's first game back was tonight - so it's only fitting and fair to look at how Mats and Claude did in each of those first-games-back, as well as a few other stats.

I'll leave the well-thought out analysis to others (in the comments, if you don't mind) - but at the risk of sounding biased, Claude appears to be more bang for his buck.  Note how much was accomplished in less than half the ice time = 3 shots on goal (compared to zero), and 3 hits (compared to 1).  Does this make him an instant fit?  Let's not get carried away - but the initial responses are good from the team (according to Joe Thornton during his interview with Rusanowsky).