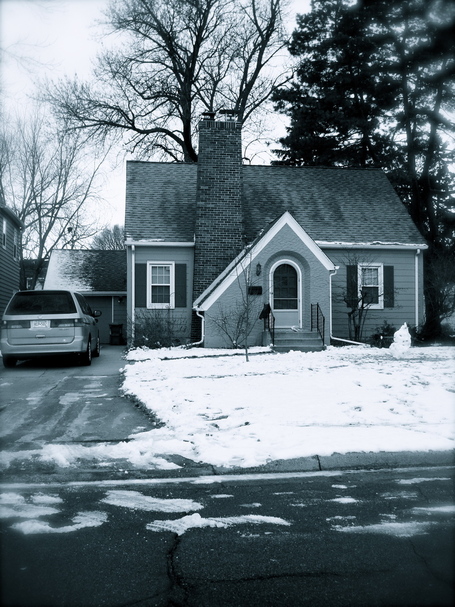 A fact that will come as a shock to some of you (sans the WBT crew that has graciously made the move with me), I wasn't born a Sharks fan, nor was I even born in the Golden State. As is the standard with most Hollywood based storylines (you should see the clubs I frequent based off this FTF gig), it's best to dig in where it all began.

I was born on October 25, 1987 in St. Paul Minnesota, a state that is commonly known as The Land of 10,000 Lakes; lakes that receive a heavy dose of wear and tear during the long winters, humbly offering a simple yet eloquent medium for exercise and sport.

What better way to take advantage of Mother Nature than hockey eh?

The love for hockey woven into the veins of Minnesota made it easy for anyone to enjoy. The high school state tournament was a frequent destination for my father (who was born in Wabasha, the town where Grumpy Old Men was based), and at the ripe age of three he found it in my best interest to drag me along. How right he was. Details don't come easy at that age, but from what I can remember, the one thing that drew my attention was the culture of the sport. There's something magical about being physically cold- it forces you to emit heat from your heart through a smile or a wave at random passerby (something that may be considered a law in Minnesota). Coupled with the elegant speed of the skaters, viciousness of a body check, and general pandemonium when a goal is scored? A fairly easy choice, as I'm sure you all can agree.

From them on I was hooked, and rightfully so. The next week I purchased my first pair of skates and headed out onto Lake of The Isles to practice with my dad. We skated for what seemed like sunup to sundown (in reality it was probably an hour or so, and I doubt I was able to skate all that much), and came home to a piping hot plate of chicken cacciatore and rhubarb pie. Ah, those were the days.

When the winter wasn't in full force my dad and I would play in the basement. We weren't strapped for money persay, but hockey was an expensive sport- I never got an opportunity to play it competitively. Regardless, in that basement it didn't matter at all. I would strap a pillowcase on each of my legs (mimicking the future of goaltending equipment quite well I must add- those things made the five hole look like a pinhole), a baseball glove in my left hand, a stick signed by Neal Broten in my right, and a laundry basket set up behind me serving as the goal. My dad would tee up socks, bunched up in balls of three, and fire them at me while I did my best to shut the door on his Stanley Cup dreams.

At night he would tell me stories about the great Phil Housley, probably the greatest player to come from the great state of Minnesota (and one of the greatest American-born players of all time); tales of watching him at the high school hockey tournament looking like a man amongst boys, how he played in the All-Star game at the age of 18, how his swift skating and rocket from the point was the thing scouts salivated over.

My favorite team was obviously the Minnesota North Stars (a franchise that has a rather peculiar history with the Golden Seals and San Jose Sharks- funny how things work out sometimes). My favorite player was Neal Broten and Mike Modano, probably due to my dad's influence. I vaguely remember the Stars magical run to the Stanley Cup Playoffs in '91, and was just beginning to immerse myself into the team when they packed up and left for Dallas.

It's one thing I'll never forgive, and frankly makes the Sharks rivalry with them all the more bitter for me. I sincerely hope they manage to worm their way into a playoff spot this season and finally get what they deserve.

Hell hath no fury like a six year old scorned.

After moving out to California, the groundwork for my impending fandom was set. My dad would take me to games on occasion, but unfortunately didn't quite warm up to the team in the warm climate of California. To be fair though, Owen Nolan's inclusion onto the Sharks roster got me lots of tickets at The Tank. I guess it's not too hard to enjoy a player that has the ability to ignite a fanbase like number 11 would continue to do during his career in San Jose.

If I had to name the most visceral moment as a San Jose Shark fan it would be game three of the 06' series with Edmonton- not due to it's heroics, but because of how helpless it made me feel. The Sharks were about ten minutes away from taking a 3-0 strangehold on the series when Chris Pronger tied the game. Two overtimes later some hack puts it past Tosk and the Sharks melt down. I think Big Joe hit about two posts that game as well.

Not the most pleasant memory, but it's the one that burns the brightest. Call me a pessimist, but I'll say this- the current Sharks team is the best suited to going deep in the playoffs I have ever seen (although you could make a case for the '03-'04 squad as well). That, however, is for the near future and not tonight.

In summation, my hockey history has been one that has had a great beginning and looks to have a bright future. It's been a pleasure to share my past memories with all you- here's to making lots more in May of this year.