Share All sharing options for: My Sharks History: SouthernBell

[Editor's Note]: This is the eighth in a series of user-submitted articles to Fear The Fin, detailing readers personal history following the San Jose Sharks. For archiving purposes this account has been republished. It was originally authored by SouthernBell on January 23, 2009; the initial Fanpost can be found here.

My hockey adventure started by meeting Dave.  He introduced me to the game.  At first, I will be honest, I just did not get it.  All I was waiting for was a good fight.  Kinda like when you watch a NASCAR race and wait for a good wreak.  I wanted to know more and understand what all the excitement was all about.  So Dave took me to Inferno hockey game.  That was the local team here in Columbia, that is no more.  So we went.  There was a small crowd.  And Dave, "Bless his heart" answered all my questions about the game.  He explained offsides, and icing, and breakout passes, how to gain the zone, cycling the puck in the offensive zone, and tons of stuff I didn’t get at the time.  We had a fun time.  But here’s the kicker to the evening.  We went home and watched a Sharks game on the tube.  And I tell you there was no comparison. The speed, the precision passes.... I got the fever right then and there.

So let’s fast forward.  As luck would have it, I traveled to San Leandro for work and was going to be there two weeks.  So what was I going to do....Dave said the "You can go see the Sharks practice."  So I did.  I drove down to the practice arena.  I had no idea where to go, so I drove around back, parked the car and followed the people.  The next thing I knew all these people were waiting for players to show up and get autographs.  So I made friends.  Hey, it’s all about the southern charm.  That day I got 13 Sharks to sign my hat, the pink "Hockey Fights Cancer" one that Dave bought me. 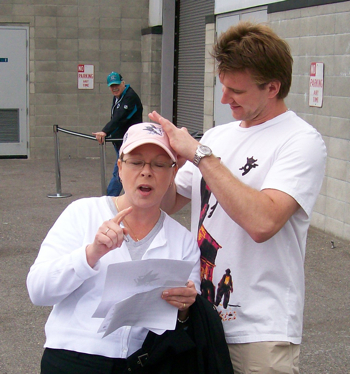 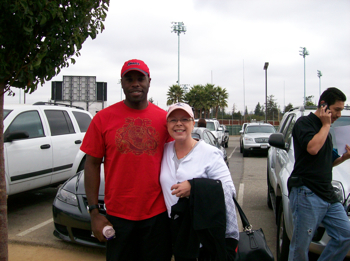 Hey, I’m 5'2.  I made it easy for them.  I admit I did not know who was who, but the folks I made friends with give me great direction and one invited to the Teal and White game.  But, I had to teach a class and had to decline. Bummer for me.  Anyway, that was a great day.  A picture with Mike Geir.  He’s a real nice guy.  And then there was Nabby.  Oh yeah, I saw Torrey Mitchell break his leg.

So, my story does not end there.  The Sharks were playing the Ducks the night before my return trip home and once again Dave said "You gotta go.  You may never get this opportunity again."  So I did.  Hell, I could write a VISA commercial about it.   $20 dollars to park, $85 dollars for a great seat (center ice), $15 dollars for nachos and a drink, $150 dollars in the Sharks store, but the memories and seeing Jody Shelly fight were priceless. (He signed my hat too) So thanks go to Dave for introducing this Southern Bell to hockey.  Damn, I’m hooked now!