Share All sharing options for: My Sharks History: CTGray

[Editor's Note]: This is the twelfth in a series of user-submitted articles to Fear The Fin, detailing readers personal history following the San Jose Sharks. For archiving purposes this account has been republished. It was originally authored by CTGray on January 23, 2009; the initial Fanpost can be found here. 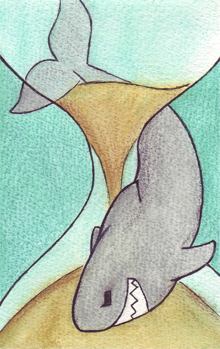 It was the start of the 2005-2006 season, the year after the lock out. I had just moved back to the Bay Area after spending several years in the Southland and was in the midst of a grueling post college job hunt. Seeking to distract me from my job woes, and to fill an empty seat, Mina invited me to a Sharks game. “Hockey?” I thought, “Well, I guess it could be fun...” So I agreed to go, figuring it would be a one time thing. I mean, who watches hockey, right?

Turns out I had been invited to the home opener. Talk about overwhelming. I arrived, was greeted by the excited Pavilion staff, given a banner and a mini Stanley Cup, (both of which are on display in my “studio”), and was introduced to the team teal in a raucous display of hometown affection. I felt very out of place and spent most of the game trying desperately to find the puck and asking Mina questions about the game. Mina was unfortunately distracted by text messaging boys, so I was forced to watch and learn what I could on my own. The Sharks won that game, and I was allowed to return. (We have a rule for baseball games that extends to hockey. If you go to a game, and the team we like wins, you're allowed back. If your attendance causes a loss, well, we may have to reconsider our friendship for the duration of the season.) As luck would have it, Mina ended up needing my services as a seat filler a few more times over the course of the season, allowing me to go to several more games, including two playoff games. By the end of the season, I was full fledged fan. I had acquired a jersey and was listening to radio broadcasts on the long drives back from Mina's place to mine. That epic 3 OT game against the Oilers was on air as I cruised down a dark highway, trying not to swerve as I yelled at my radio.

I was a regular next season, once again filling in the empty seat that would have otherwise been occupied by Mina's brother, and getting tickets to a few extra games as well on my own. Last season, (2007-2008), we made the jump and became Shark Pack holders, figuring if we're going to be at 10 games a season anyway, we might as well save a few bucks doing it.

We started blogging on a Mina inspired whim during last season's stressful playoff series against the Flames. The drawings were not a planned part of the blog, but frustrated by the hit on Marleau, I put pen to paper and the first Sharktoon was born. I drew a few more before the season ended, and somewhere in that whirlwind we managed to get a few readers. Having nothing better to do over the summer, (my job at the time had very few hours for me during the slow summer months and Mina has summer's off), we started blogging in earnest. The rest, as they say, is carefully archived Internet history.