Share All sharing options for: My Sharks History: Section223

[Editor's Note]: This is the fifteenth in a series of user-submitted articles to Fear The Fin, detailing readers personal history following the San Jose Sharks. For archiving purposes this account has been republished. It was originally authored by Section223 on January 23, 2009; the initial Fanpost can be found here.

Wow, these stories are awesome.

This isn’t a history of how or when I became a Sharks fan, because, honestly, I don’t remember how it happened. It just kinda happened. Sorry. Just read the first 2 paragraphs of mepex’s story; it applies to me (just add "Billy Ball" and "Humm baby!").

No, this is just one of many stories about our times at the Tank.

Our family splits a 4-seat season ticket with 3 other families, so we get to quite a few games in a season. My sons are becoming pretty good hockey fans. Of course, hockey sometimes takes a backseat to the other events of the evening.

Usually, during the 1st intermission, my son, Anthony, and my wife make the trek down the many steps and through the crowd of fans to get snacks and drinks. My other son, Andrew, and I stay in our seats, since he likes to watch the activities on the ice ("Full-Contact Musical Inflatable Chairs" is his favorite).

During a game last season, as my wife was heading to get snacks, a woman stopped at our seats and (seeing as it was just the two of us) asked if I was at the game with my son. I told her that, indeed, I was. She held out a certificate and asked if Andrew would be interested in riding the Zamboni during the 2nd intermission. Her mom had won the certificate, but she had no intention of riding on a silly contraption in the middle of a hockey rink for all to see. Andrew, however, had no such reservations. He was thrilled (his older brother, not so much).

The certificate stated that we needed to be at the elevators (on the other side of the arena) no later than 9:00 left in the 2nd period. To make Anthony less unhappy, I told my wife that I’d try to get both boys a Zamboni ride (it was worth a shot), so with about 15:00 minutes left in the period (no way we were gonna be late!), the three of us headed to the elevators.

We made it to the elevators in only a few minutes. I think there was a stoppage in play around the 13:36 mark. Seems like a random detail, doesn’t it? Oh, did I mention that it was November 10th, 2007? That’s kind of important, too. As we’re waiting for someone to show up and let us on the elevator, we hear the crowd…getting louder…really loud now…hey, there’s the horn…we scored…yay, team…wait…really REALLY loud now…the place is going crazy…holy…no way…did I just miss…no…did I? Yep. Jeremy Roenick dumped the puck. Into the net. # 500. And we were there…only, I didn’t see it. I was waiting for an elevator. I missed it. Sonuva…

As I realized what had just happened, I ran over to the lower-level doors to watch. My sons followed, not sure why I was running. They knew we scored, but it didn’t sound like any other goal they’d ever heard. I told them "JR just scored his 500th goal…" I really wish I could have sounded less disappointed, but I couldn’t believe I had missed it because I was waiting for an elevator! I then snapped out of it and remembered that I was at a hockey game, hanging out with my sons, and they were about to do something very cool.

We ended up getting back to the elevator in plenty of time, but unfortunately for Anthony, the other person who had a certificate for a Zamboni ride also showed up. He was very cool about it, tho (and we made up for it on Fan Appreciation night – more on that later, perhaps). They let the three of us go down into the bowels of the Tank (man, it seemed like such a maze), and we watched the final 9:00 of the 2nd period behind the glass in the Zamboni tunnel. 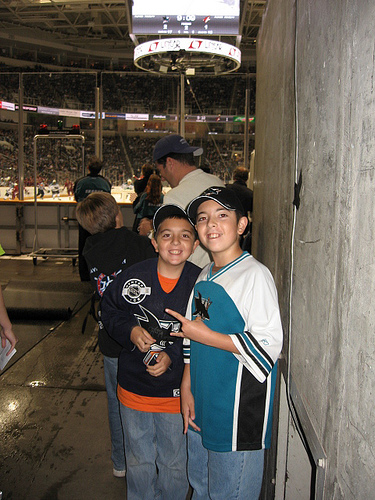 And Andrew got his Zamboni ride: 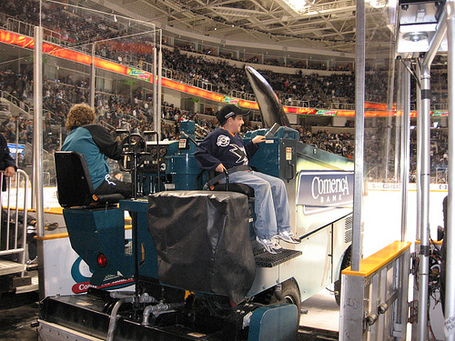 And the Sharks won, and all was good.

For what it’s worth, I still get chills when I see JR's goal (and his reaction) on YouTube (which is pretty much the only way I've seen it):

P.S. While researching this little story, I happened upon this site:

Yikes. I hope I didn’t break any laws...