Share All sharing options for: My Sharks History: WhoseYourNabby?

[Editor's Note]: This is the eighteenth in a series of user-submitted articles to Fear The Fin, detailing readers personal history following the San Jose Sharks. For archiving purposes this account has been republished. It was originally authored by WhoseYourNabby? on January 24, 2009; the initial Fanpost can be found here. 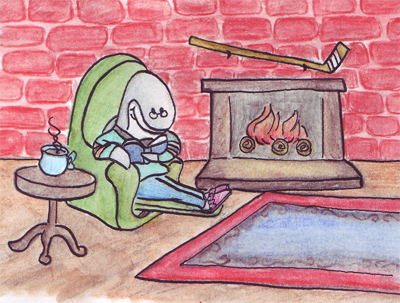 I would like to start with this: idunno's story is FALSE!

My Sharks history is not as exciting as everyone else's story. I was born and raised in San Jose and still do live in San Jose. Since I am only in high school, I haven't been a fan for that long. When I was younger, none of my friends watched hockey. I always saw hockey on TV and just skipped right over it. I had no idea what the rules of the game were. The only hockey I watched was when idunno watched the mighty ducks movie.

The only sport I liked was soccer. It was my life and still is (with hockey now of course!). [Side note: My soccer team is called the Sharks. I used to hate it until I became a fan of the San Jose Sharks. Now I think it's awesome!]

The only person in the NHL that I knew of at that time was Sidney Crosby. I was obsessed with him just because I thought he was cute and I heard he was a good player. I still do like him but of course my Sharks are my number one priority.

One day my older sister randomly got season tickets for the Sharks. I didn't even know she liked hockey! She told me to go with a game with her. I thought, "Why not? I had nothing else to do." After that game, I was hooked. It was so fun and exciting. I got home and researched everything about hockey and the Sharks. I looked at the player pictures and saw that some were pretty darn cute. Now that was a plus for me to watch. (NO I am NOT a puck bunny! Idunno told me to stop obsessing about the players so much and watch the game more so I did).

Now fast forward a couple of years. I am a huge Sharks fan and I have watched almost all of the games this season. My friends say I am too obsessed because the Sharks are all I talk about. I can't help it! Unfortunately, I don't have my own jersey because they ran out of Pavelski jerseys. I do share one with my sister though. It's been signed by Pavelski, Boucher, Shelley, Blake, Setoguchi, and Mitchell.