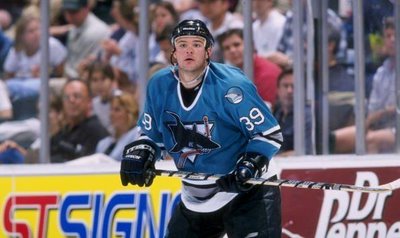 As was the theme of the two other rounds of voting, the first pick in the LW category was chosen in a landslide. You selected Jeff Friesen, awarding him with 55% of the overall vote.

I'm going to save the analysis for the Left Wing voting wrap-up. However, I will say this: I believe Friesen was most deserving of the first pick. I loved him in San Jose and was crushed when they sent him away to Anaheim. Looking back, that trade really didn't work out for either side.

All things considered, Friesen will always have a place in the collective heart of the fans and the organization... let's hope his recent return to San Jose is a sign of things to come. (Hello, Mr. Front Office Assistant?)

There are five other left wings vying for a place on this "Greatest Sharks" team: Johan Garpenlöv, Tony Granato, Milan Michalek, Marco Sturm, and Ray Whitney. A good case can be made for any of those players.

Vote for your choice and tell us your reasoning in the comments. Make the jump for player analysis, if you need a quick history lesson...

Note: To be considered a member of the "Greatest Sharks", you must have played parts of a minimum of three seasons with the team. A player must receive at least ten votes and 25% of the overall vote to be included on the "Greatest Sharks" team. If the ten vote and 25% total is not met by at least four players, a second round of voting will take place which will include all players who did not receive at least ten votes and 25% of the vote.

Johan Garpenlöv: Playing on a line with Igor Larionov and Sergei Marakov, the Swedish Garpenlöv played a major role in the Sharks' magical playoff run during the 1993-1994 NHL season. During that year, Garpenlöv would contribute 22 goals and 41 assists (in 94 regular season and playoff games). In his career year (1992-1993), Garpenlöv would post 66 points, 22 of them goals, in an injury shortened season (79 games).

Tony Granato: Although injuries and relative old age would hamper his effectiveness as a member of the San Jose Sharks, Granato would contribute 99 points (57 goals, 42 assists) in 279 regular season games with the team. Although considered to be somewhat of a "feisty" player earlier in his career, Granato was the first and remains the only Sharks player to recive the Bill Masterson Memorial Trophy after he overcame a potentially career ending brain injury the season prior. Granato was a strong voice in the locker room; he helped lead San Jose to the playoffs in four of his five seasons with the team.

Milan Michalek: Michalek, drafted 6th overall by the Sharks in the 2003 NHL Entry Draft, had to overcome early injuries in his career to evolve into the player he is today. After scoring a goal in his first NHL game, Michalek would severely injure his knee in his second, missing his entire rookie season. After rehabilitating that same knee during the 2004-2005 NHL lockout, Milan would score 35 points (17 goals and 18 assists) during his next NHL season. In 280 games with the Sharks, Michalek has scored 186 points and has come to be known as a solid two-way player.

Marco Sturm: Another first round pick of the Sharks (Pick 21, 1996) Sturm was a versatile winger who helped catapult the Sharks into the ranks of the NHL's elite. The German Sturm was a notoriously fast yet powerful skater, posting 273 points in 553 career games with the San Jose. His only full season (2002-2003) was his best; Sturm would score 28 goals while adding 28 assists in 82 games. Although his tenure with San Jose ended on a sour note (he was part of the package sent to Boston for Joe Thornton), he was an important member of the Sharks during his time with the team. Even though he was recently passed by Jonathan Cheechoo, Sturm still remains 7th on the Sharks' all-time scoring list.

Ray Whitney: Drafted by the San Jose Sharks in the second round of the 1991 NHL Entry Draft, Ray Whitney is known most for his late-in-game heroics. During the 1994-1995 Stanley Cup playoffs, Whitney would score a true "elimination goal" in his second season with the Sharks, putting the puck past Calgary Flames netminder Trevor Kidd in the overtime period of Game 7. Whitney would go on to score 121 points in 200 regular season games with the Sharks before being signing with Edmonton to start the 1997-1998 season.