[Editor's Note]: Walk The Plank will be a recurring piece on Fear The Fin this season. Despite lacking a creative name (frankly it's rather pathetic), this series will touch upon issues across the NHL, as well as those within the San Jose Sharks organization. This week we take a look at the Western Conference Regular Season Champions Banner that was raised in HP Pavilion before the home opener against Columbus. 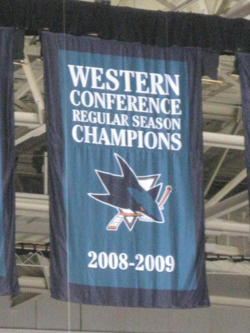 Although it has been discussed rather extensively during the course of the last week, the time has come for the almighty equalizer- a poll. But before we get to that, a little background on the issue and a review of the prevailing opinions from Fear The Fin readers.

The Sharks regular season success and subsequent playoff disappointments have been well-documented, and this has inevitably led to a lack of trust amongst the fanbase concerning how the organization presents itself publicly. Some want the team to continue to acknowledge these failures ad nauseam, in the hope that it will eventually motivate the players into breaking through during the postseason- call them the "History is our greatest teaching tool" group. Others point to the uncertainty of the NHL playoffs, and chalk it up to a combination of bad luck and injury issues- call them the "It's a new year" conglomerate.

Then, of course, are those in the middle- the shades of gray swimming amongst a sea of black and white.

I find myself in the "gray" category most days, but admittedly find it hard to imagine the thought process that led to a Western Conference Regular Season Champions banner being hung from the rafters. It's a perpetual reminder of the choke label casually thrown around by the MSM whenever discussing the Sharks, and essentially comes down to a case of selectively double dipping in order to create an increased sense of accomplishment. The nature of winning a Presidents' Trophy (and proudly hanging that well-deserved banner) ensures that you were the best team in the Conference due to the fact that you were the best team in the league during the regular season. Hanging a Regular Season Champions banner is redundancy at it's finest.

However, that doesn't mean there aren't a wide variety of opinions on our humble site, both for and against the banner. Make the jump for quotes from Fear The Fin readers, along with an image from Joe Louis Arena that shows San Jose isn't the only organization who has made this decision.

Here's what some of you had to say:

All it does it piss me off more about our regular season ‘accomplishments’ but total ineptness when it comes to the post season.

I don't mind redundancy in this case. Yes, if you follow the sport you get that the Presidents' Trophy also equals a regular season conference win, but not everyone coming in will know that right away and 6 banners in visually more impressive than 5. It’s also a visual pride booster and MAYBE it gets into the head of the other team on occasion. Who knows?

I think this is one of those cases where one is either for it or against it and we just happen to be on differing sides of that gulch.

Guess who else happen to have a banner with this exact same wording: 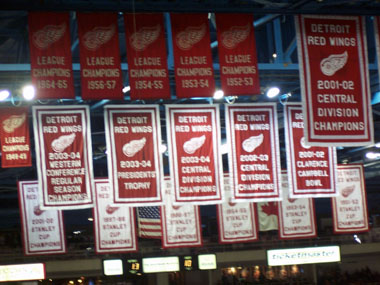 Truly, the Sharks are modeling themselves after the Red Wings – even during their embarassing moments.

At least they’re not arbitrarily retiring numbers. Because, IMO, that’s worse than putting up a Western Conference champs banner – they can always take a banner down, but it’s hard to unretire a number.

The Western Conference Champs banner is quite redundant, and a wee bit misleading, though. So I’ll agree that it would probably be better to leave that one out. Although I’m not sure anyone leaguewide will care. And if they don’t care, and it fills out our rafters a bit, so be it. If it helps marketing of the team to have a few more banners up, no matter how redundant they are, by all means they should put them up.

Did anyone notice how the Sharks banners look like they came straight out of the wash? I sincerely hope the wrinkles are ironed out. Someone should hop up there with a steamer and get to work.

Effective marketing or a redundant celebration of mediocrity? A painful reminder of postseason failure or a celebration of the halcyon days of regular season triumphs? In need of a good steam press?

You decide. But if it was up to me, the Regular Season Champions banner would (wait for it, wait for it)... walk the plank.