Sharks Gameday: Like A Virgin, Touched For The Very First Time

When the Sharks road trip was shiny and new, we took a look at scoring occurrences (amongst other things) against opponents throughout the first six games. There's a lot of illuminating information in that piece, but a brief summary can't hurt right?

It depends on what your definition of "hurt" is. What hurts me is watching the Sharks come out softer than an inebriated geriatric leaving Spearmint Rhino. And like the future of, well, future Plank, I am hurting right now. For the life of me I can't figure why getting going in the first period is an issue for this team. They've given up the first goal in 75% of their games thus far. They've gotten hemmed in on the forecheck, lacked pop in the neutral zone, and been shoved back onto their heels.

As Sharks fans, it is our duty to wear tinfoil hats and await our eventual demise identify the issue and find solutions. Although McLellan wouldn't dare dream of taking our input (thank God for that), it hasn't stopped us before. Onward ho!

Behind The Bologna: Why Todd Richards Actually Left San Jose 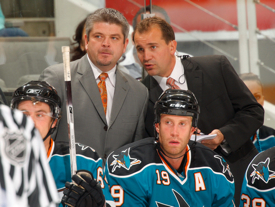 "Hey, Coach, these Fear The Fin guys had this idea..."

1) Luring other teams into a false sense of security. This one's pretty applicable to your personal life, so it's not too difficult to understand where the Sharks are coming from. A friend invites you over for the night, you share some laughs and let them dominate the conversation. Said friend goes to the bathroom and BOOM! Tough actin' Tinactin baby, they're right where you want 'em. Upon return you're naked on the couch demanding three Twinkies and a glass of 2% ("Don't take time to milk the cow ya hear!"). The quick turn of events, coupled with the fact you were so amicable only moments before, prove to be too much for the opposite party to handle.

Drawbacks: After awhile word gets around that it's a smoke-screen and people come prepared for a full-length fight.

2) Rob Blake hated Gang Busters. As a child in the 1930's, Rob Blake was forced to listen to Gang Busters by his peers due to the fact that his family was the only one on the block who owned a radio. The term "Coming on like Gang Busters" reminded Blake of afterschool threats of violence, a fear that continues to this day. 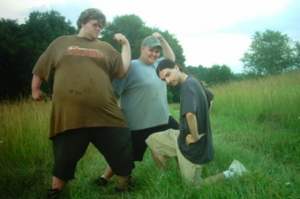 Following the announcement of the Captaincy, Blake vowed to never give local newspapers an opportunity to use the beloved American catchphrase.

Drawbacks: At no time do the Sharks ever "Come on like Gang Busters", causing police sirens to flood the city of San Jose.

3) Lack of heart. Without a sufficient cardiac cycle, skaters are forced to save oxygenated blood for latter periods. It is a known fact that Doug Wilson will not sign a player unless he has a malfunctioning left atrium and ventricle (i.e. the third and fourth rounds of blood flow).

4) A lack of preparation, familiarity with linemates, inability of the blueline to hit aggressive breakout passes on the tape of forwards above the circles, and reliance on the big scoring guns. I really haven't been able to pin the Sharks first periods on one specific thing, but can safely say that it is a team wide ailment, and not something restricted to individual lines. It's almost as if the team is waiting around for someone else to make that defining play early in the period and get them going. The only positive I can take from the current run of anemic opening stanzas is that Todd McLellan probably still has the ear of the locker room- after the first twenty minutes the Sharks have come out and put pucks into the back of the net (13 G, compared to 5 in the first and 7 in the third).

It's getting them to come out in the initial twenty that concerns me.

Prediction: Sharks win 2-1. Goals by Boyle and Blake. Marian Gaborik tweaks his groin after high fiving Chris Drury, and exacerbates the injury following a casual glance up at the Jumbotron.