The Month on Tap: Octoberfest

Share All sharing options for: The Month on Tap: Octoberfest

I took a look at the season schedule earlier this offseason, establishing a power ranking of the months facing San Jose this year. Obviously these initial rankings will likely change throughout the season when various injuries and transactions occur, but it's a decent enough barometer of what we can expect to see in terms of competition (and subsequently wins, losses, and those asinine loser points*).

*To be fair, they do make for a more exciting stretch run as it bunches teams together, but I never could wrap my head around the fact that a team can lose and still receive a point. I also could never wrap my head around how a game can be decided with a skills competition. Apparently my head isn't very elastic.

At any rate, what we have after the jump is a non-scientific look at the upcoming schedule for the month, and some quick prognostications. I plan on doing this for every month of the year, as it's a nice blueprint and will allow us to highlight some important games for San Jose. 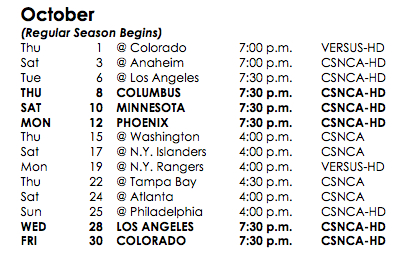 The Sharks tackle their annual Mega East Coast trip early this year, and I couldn't be more pleased. If you remember last February, San Jose hit the road and subsequently hit a wall, going 1-1-3 in what was expected to be a good indication of where the team stood heading into the stretch run.

The same principles apply this season, albeit in an entirely different manner- while McLellan won't be analyzing his roster in preparation for the stretch run, he will be afforded an opportunity to take a look at some of the two-way contracts currently in the system, and prepare the NHL roster for the bulk of the season. The close proximity of Worcester to these locations allows him to do that. Will it be taken advantage of? Maybe, maybe not. But at this juncture of the year I don't think it's an especially risky decision to make, with the hope that competition for those NHL level spots will produce a clearer answer at any given position.

In terms of the actual month, I like the fact that San Jose has a fair amount of road games (9 A, 5 H) this early on. It doesn't coddle them, but at the same time, it doesn't punish them either. Most of their opponents are either in the middle of the pack amongst their Conference (Minnesota, Columbus, Los Angeles) or bottom feeders who are a long shot to crack into the upper half (Tampa Bay, Phoenix). Get the boys in some unhospitable arenas and force them to simplify their game. You're not going to win many road tilts in the company of porous defensive play, and with that being a weakness for this club, emphasizing it early should hopefully accelerate the development process. Same goes for Thomas Greiss- get him some starts early to spell the 34 year old Nabokov, and let him grow into his role. Sitting him on the bench like Ron Wilson did in 2007-2008 isn't going to do any favors for the team, both at the end of this season as well as next offseason.

The End Result: 8-5-1. The blueline will go through some growing pains, and while the last change at home can mask that, the road game is a different story. Goal scoring keeps them in games for the majority of the month and the first line begins to click as they roll into November- by far the toughest month of the year.