He's been Public Enemy Number One, labeled a menace to society, voted the dirtiest player in the NHL, been booed at 30 arenas in the league (even including one he played for), and cursed every organization that traded him. He's terrorized the Sharks for a decade, first with St. Louis, then with Edmonton, then with Anaheim.

And yet, I love the guy.

Call me a turncoat. Go ahead. I'll elbow you right in the mouth, stomp on your buddy, pulverize your star forward and defend my crease like lives are on the line. I'll play 30 minutes a night, make my below average partner look like a goddamn magician, kill penalties while skipping the shift change and thread a pass to spring a breakaway. I'll spit, I'll scowl, I'll swear, I'll flash a cocky grin.

Then I'll rip home a howitzer in the second overtime. And you will rue the day that I was ever born.

Impeccable reach. Impeccable. Next time you see Pronger get burned by a forward off the rush buy a Lotto ticket because it's your lucky day. 220 pounds on a 6'6 frame, size that is used to it's fullest potential. A will to win, a refusal to lose, a moral compass that went awry years ago. A moral compass that always points to the benefit of his teammates. Of his family.

The Sharks haven't had that presence on the backend lately. They haven't had a team that would punch you right in the goddamn mouth and laugh in your face. I sincerly hope Nick Petrecki can become that type of player down the line, because if there's one thing the Sharks have lacked throughout the last four years, it is a shutdown defenseman who is chomping at the bit to go up against the best players in the world, a guy who thrives in that situation. A guy who wakes up each morning and chews on some sheet metal before he heads to the rink. San Jose has routinely been criticized for a lack of heart, a lack of toughness, a lack of caring. And while I don't buy into that bullshit at face value, ask yourself a simple question- are they family? Do they look as if they live and die together with every loss? Do they stand up for one another, fight for one another, push the boundaries of right and wrong for one another? Pronger brings that to a team. He instills that in a team. He turns a team on the borderline into a Cup contender every time he hits the ice.

It's a damn shame he doesn't play in the division anymore. Not because I get a sick kick out of him shutting down San Jose, and it's sure as hell not because I think he looks good in an Anaheim sweater. It's because it would have been an honor to watch him for eighty two plus.

And something tells me we wouldn't be bitching about what kind of banners get hung up in the rafters at HP.

Quick shoutout to FTF favorite Brian Boucher. Love the man and hope he gets to see some success in Philly. Except tonight of course, as he's probably getting the keys to the car after Emery played against Florida. Does the same go for Greiss? Time will tell. Regardless, here's a classic shop for the road: 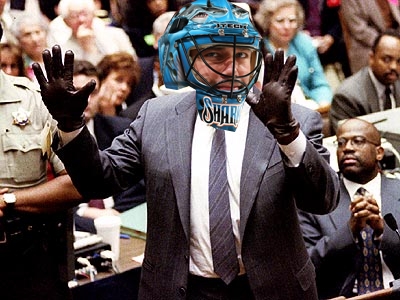 Boucher with the glove save

Prediction: Sharks win 3-2. Goals by Thornton, Vlasic, and Clowe. Pronger gets booed The blog gets booed.