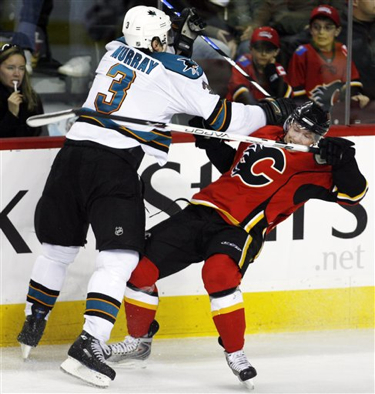 Twelve game in the books for the San Jose Sharks, and a 7-4-1 overall record coming out of a six game road trip.

During the course of October, many questions have been raised about the performance of the team as a whole, but none more prevalent than the strength of the blueline. Without the luxury of available cap room, it's doubtful Doug Wilson pursues an upgrade via trade lest he sacrifice scoring depth amongst the forwards or deplete the strength of the organization's prospect pool. It is likely we will live and die with these band of brothers until the 2009-2010 season rings it's final bell.

Which begs the question- how good have they been thus far?

To start things off, let's take a look at the location of where the defenseman are starting their shifts following a whistle. While by no means a defining measurement of worth, it does provide us a glimpse into the mind of Todd McLellan- who does he trust the most in the defensive zone?

Takeaways: The Vlasic/Blake pairing takes a lot of draws in their own zone compared to the rest of the unit, while Boyle drags Murray along for those luscious offensive zone opportunities. Demers and Huskins fit right into the middle. It's safe to say that Vlasic/Blake are going to have fewer scoring opportunities than Boyle/Murray due to this role.

One thing that jumped out at me is the fact that McLellan has leaned heavily on the Vlasic/Blake pairing in the defensive zone, even with their less than impressive numbers thus far (more on that shortly). My guess is that he's locked into the notion that they are his shutdown pairing and is planning on giving them the benefit of the doubt for the time being. Is that the right decision? I'm not sure. The need to get Boyle a lot of looks in the attacking end is understandable, but McLellan is utilizing Murray in a highly offensive role directly off the draw the majority of his starts. Preseason hat-tricks notwithstanding, this goes against everything the Swedish behemoth stands for*.

*Namely liquefying bones and raising the dead from their graves.

If Blake/Vlasic are struggling at this point in the season why not ease off on the gas pedal and tap Boyle/Murray a bit more in front of Nabokov? Blake can still provide a big shot from the point to generate scoring opportunities in the offensive zone. You lose some defensive acumen with Boyle, but not a significant enough amount where you see the team as a whole take a huge dive- Murray's presence will help here. I think it's a strategy that needs to be explored until last year's shutdown pairing manages to find their game.

Next up is even strength play. For a refresher course on the importance of this part of the game, or for those who are new to Fear The Fin, this article from last season should serve as a good place to get your feet wet.

Empty net goals have been discluded in both the GF and GA categories.

Takeaways: Huskins and Demers have had the most success here, with the Sharks outscoring opponents at a much greater rate whenever they are on the ice at even strength. And, as expected, Blake and Vlasic have clearly had a great deal of trouble keeping pucks out of their own net.

Admittedly, I haven't been the biggest fan of Huskins the last couple months. From the initial signing to his porous play during the preseason, I've worried aloud about the defensive depth in San Jose and how it would affect the team's ability to win hockey games.

Turns out he and Demers have been a pleasant surprise. Yes, they have seen sheltered minutes. Yes, I would like to see Demers clear the puck up the boards more often as he's prone to force his breakout passes and turn over the puck in the center of the defensive zone. Yes, Huskins could stand to lay on the body around the net. However, these are minor gripes at best- as ElvisVF101 and Evilducks have noted, they aren't getting paid a monetary sum that would cause us to expect much more than what they have provided. And that's a real bright spot for a team who has struggled at times in the defensive zone.

At the heart of the issue lies Vlasic and Blake. If the Sharks want to do some legitimate damage this season, it's essential these guys get going. As mentioned above, I think relieving them of the lion's share of d-zone draws might be a good short term solution- give them an opportunity to put pucks on net and create offensively. Blake seems like he's been fighting to find shooting lanes, and he's lost a bit of lateral quickness when moving at the point. Some more time in the easy part of the ice may get that big shot back it's net nose.

The last thing on the docket today is special teams play. Demers hasn't logged sufficient enough minutes per game on the PK to warrant consideration (0:14), and has thus been left out. On the PP side of the ice, Murray (0:05) and Huskins (0:15) are in the same boat.

Takeaways: It's hard to take too much stock into these numbers right now considering a fluke goal here or there can alter them quite a bit (with special teams time less frequent than even strength), but here's a few general observations:

Inconsistent is the one word I would use to describe the Sharks blueline thus far, and hopefully they can use the two upcoming home dates to build on a good performance last night against Philadelphia. Even with a 7-4-1 record there's a lot of unanswered questions on how everything will eventually play out.

And I'm not expecting many concrete answers anytime soon.