The Fins' take on Atlanta!

Share All sharing options for: The Fins' take on Atlanta!

(Ooooo, a meaning-changing apostrophe!  Don't worry - that's as deep as this gets) 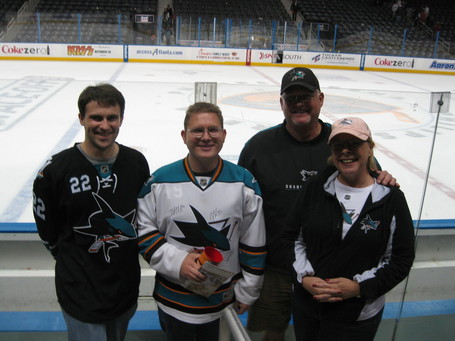 San Jose Sharks fans are a well-traveled bunch, and present at Team Teal's 4-3 road victory against the Atlanta Thrashers on Saturday were Dave Valentine, his lovely bride SouthernBell, Lurker Shark, and yours truly, Conico.  Did the Valentines burn down Atlanta?  Did my fat ass choke on collared greens and fried okra?  Did Lurker score with the ice girls?

Secret agent Lurker Shark downshifted outside the FTF bungalow, and Mr. K., code-named Conico do Mayo Miracle, jumped into the moving vehicle before it screamed its way up the peninsula to SFO.  After briefing L.S. on the merits of road games, K found an abandoned hangar in which to stow the car, and the men dashed to their private 6am flight to Atlanta.  Their mission = rendez-vous with "Boris" Valentine and "Natasha" Bell in downtown Atlanta, and together disrupt the Thrashers' festivities in Philips Arena, permitting the Sharks a surreptitious victory.... or at least the first goal of the night.

Upon arrival, Lurker and K managed their way through the dense obstacles of Atlanta's public transportation system (MARTA), and navigated through the Centennial Olympic Park under cloudy skies to the rendez-vous point = the Embassy Suites.

The Embassy Suites also served as the foreign headquarters for Dan Boyle's booster club, who snuck out of Tampa holding cells for the occasion. 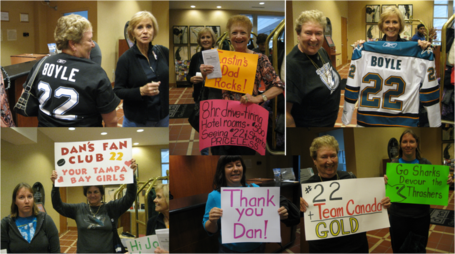 Dave Valentine was just as tall, though not nearly as crusty as K anticipated, while Bell's cute southern accent belied her impressive kill count.  After the requisite pleasantries (Atlanta being in the South and all), the foursome set up base within the hotel... 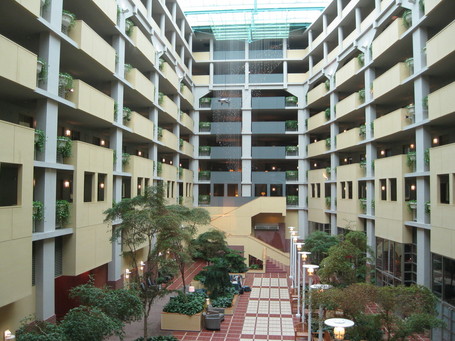 ...before debriefing at the Hard Rock Cafe over hamburgers and beers, and later parting as one teal unit to the Philips Arena, where Atlanta denizens prepared for entertainment by fueling up on life's bare necessities. 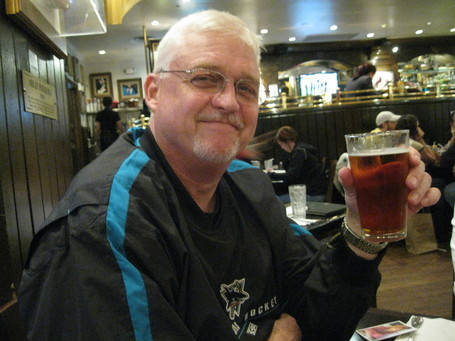 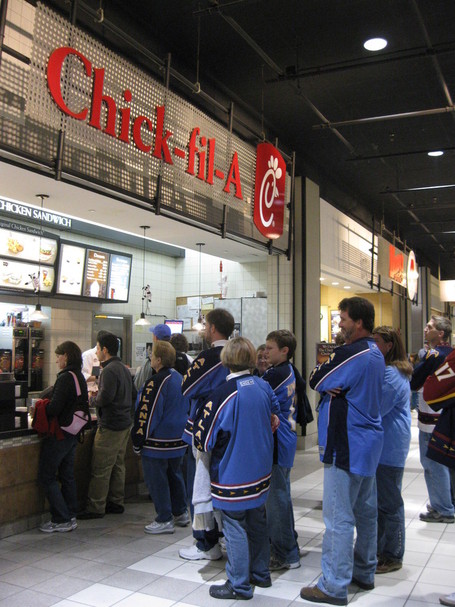 Practice between the two squads began, and Lurker and K let down their guard just enough for B.W.A. agent Patrick to sneak up behind them.  Fortunately, per their previous correspondance, it had been established that Patrick was something of a double agent, and his frank assessment of his double-crossed fanbase ("If Kovalchuk leaves, we'll eventually move") left no doubt as to his trustworthiness. 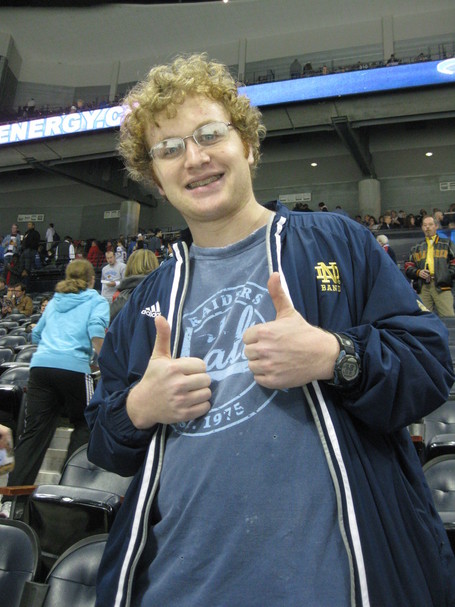 After an in-depth conversation with an Atlanta-insider, Lurker and K took a look around the facility, as well as onto the ice. 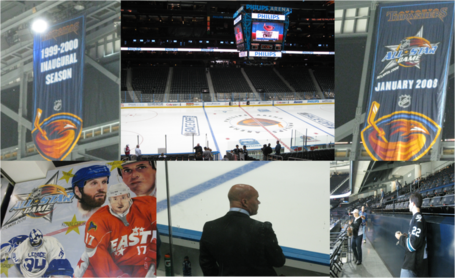 In a foreshadowing of what was to come, Lurker would fall for the oldest trick in the world of secret agents - the girl. 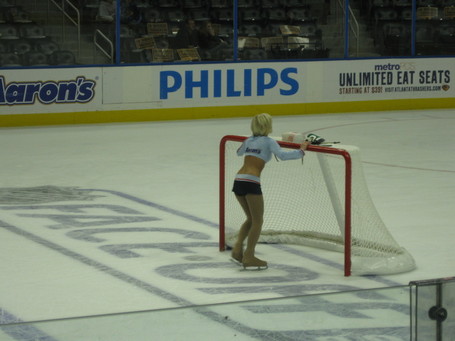 In a strange pre-game ceremony, the unwitting Ryan Vesce was paired with an equally tall juvenile female agent - solely for the purpose of embarrassing him. (Note - they're the shiny ones) 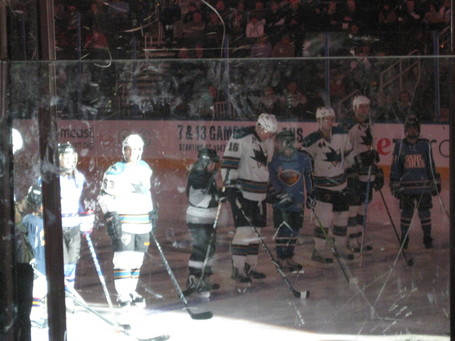 No matter - game time was to begin, and the Thrashers' modest but impassioned fanbase roared to life... before Joe Thornton scored the first goal a few moments into the game, marking just the second time this season that the Sharks had struck first.  A full summation of the game is the job for other folks, but suffice it to say that Lurker and K had to secretly join Dave and Bell behind the Sharks bench in order to pass defensive corp information to McLellan and Yawney.  The FTF duo documented their observations diligently, despite losing much perspective while watching the game through Team Teal's heads. 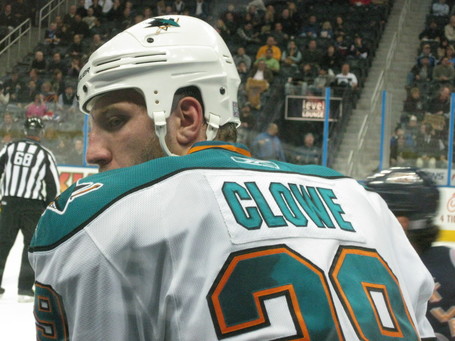 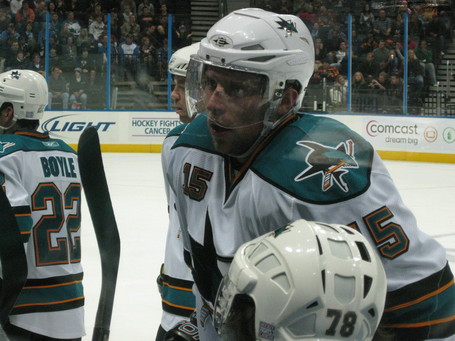 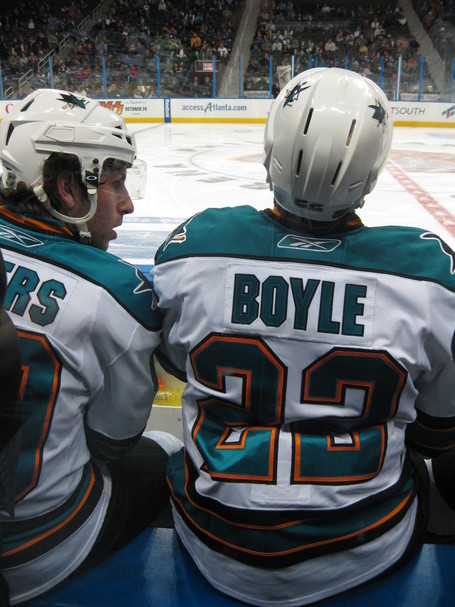 "Did you really have to play these guys 6 times a year?"

"EIGHT times, Jason... but that was before you were born."

Having previously banged the glass in frustration (no, seriously!), Todd softened to his stoic self yet again as the Sharks struggled to maintain a 4-1 lead, which in time dwindled to a one-goal lead.  Fortunately, former captain Patrick Marleau's unusual banked-in shot off of Johan Hedberg stood up as the surreptitious game-winning goal, and the Sharks' record for the trip would improve to 3-2-0. 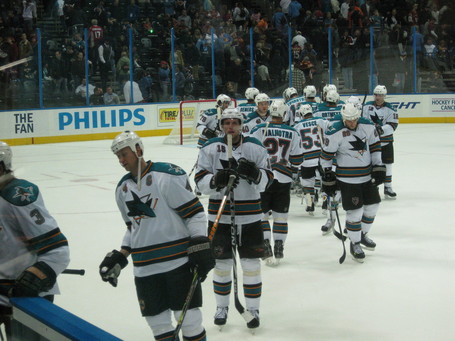 During post-game celebrations in a local bar, K (proudly yet perhaps unwisely still wearing Sharks apparel) almost became victim to a Thrashers-supporting bartender's assassination attempt = his beer bottle rim was completely broken off, exposing him to mortal danger.  Prior to lacerating his mouth and bleeding to death, Dave and Bell (who have more experience at foiling assassination attempts) saved K's life... and then went to town, leveling the bar and taking no prisoners. 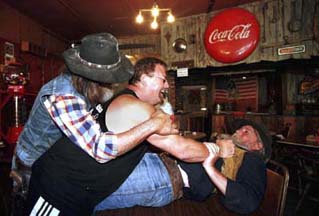 Lurker took the opportunity to guide an Atlanta Thrashers ice girl to safety, before bedding her properly.

In light of the previous evening's retributions, Dave and Bell understandably had to flee Atlanta for their home base of Columbia, SC, before Lurker and K could wake up.  Once up and moving, the California agents satiated their pallets with chicken and waffles, before sizing up two of Atlanta's primary cultural institutions, the Martin Luther King, Jr. Historical Site, and the Georgia Aquarium.  The latter featured, very appropriately, two specimans of the world's largest shark - the whale shark - while the former was a moral obligation. 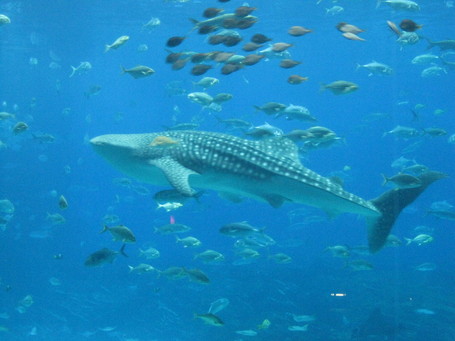 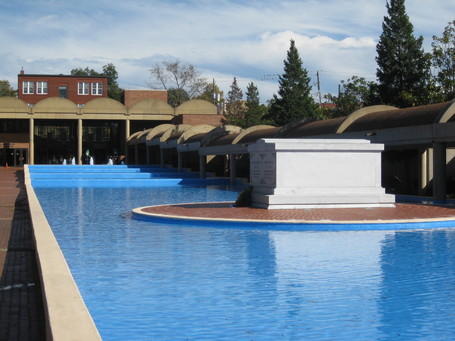 Lurker and K then boarded their 7:30pm flight back to the Bay - God bless XM Radio, which allowed them to catch their beloved Sharks' victory against Philadelphia... and K's beloved Yankees' victory (ahem....).

What's Next for Our Agents?

Lurker, soon to be subject to a paternity suit, is mulling attendance at the Sharks next road outing against the Carolina Hurricanes.  Dave, Bell and K hope to badger him into capitulation, knowing all the same that he and K will be in St. Louis and Chicago in another 3 weeks, for more top secret espionage missions.