All Hallows Eve is right around the corner, and what better way to kick things off than a Photoshop Expo. Nothing like the smell of fresh chops in the air.

Apparently DW was working in his lab late last night when his eyes beheld an eerie sight. Monsters of old began to rise, and to his surprise they rose from the dead to do the Monster Mash. 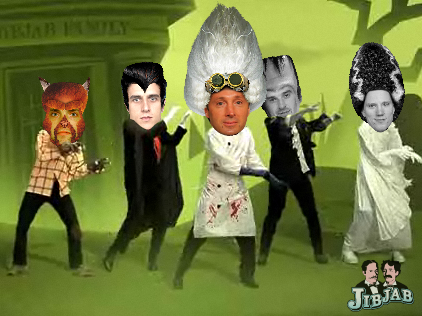 So what is this Photoshop Expo all about? Whatever you want it to be. Costumes San Jose players would wear (Marleau as a mime), costumes opposing players would wear (Getzlaf as Princess Peach), artwork you’ve done yourself (sup Gray), pictures of Sharks related pumpkins (see fanpost by SwisherThresher), or anything else you can think up. All I ask is that you follow these basic guidelines:

1) Put a description of your chop in the "Subject" field. By doing this, other readers can minimize your image if they’ve seen it already, and prevent the thread from lagging like that fat kid who brings two costumes out so he can take in twice the loot.

2) No Ray Ratto photoshops. Look, the guy is as abrasive as they come, but acknowledging his presence just fuels the fire. Let’s be the bigger people and refrain.

3) Keep it civil. Halloween has always been a holiday with forays into the morbid, and I totally dig that when it's done artistically. However, depictions of any individuals being harmed in a brutal and overly violent manner will not be tolerated. You know the line. Please don't cross it. We've never had a problem with this before, but the nature of the event could bring out the ghouls so to speak. 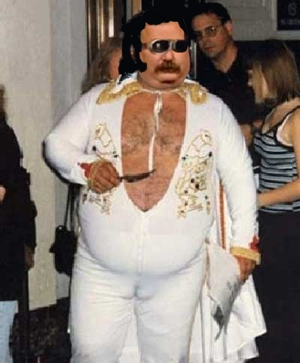 Okay, number two is officially off the table

Halloween isn't for another two days you say? Bah! Don't be such a square. We'll be keeping it lively all weekend long so there's no need for you not to do the same. Drop your goods in the comments, and keep close watch on your kids Saturday if they're trick or treating around Conico's house. That van parked outside with "Free Candy!" emblazoned on the side should never be trusted. No matter the holiday.