Sharks Gameday: Getting Back On Track

Share All sharing options for: Sharks Gameday: Getting Back On Track

During the course of an 82 game NHL season, nights like Wednesday are as inevitable as your uncle drinking too much wine at Thanksgiving dinner and divulging a handful of family secrets. The helplessness you feel as seventh grade episodes of bed-wetting are served with pumpkin pie become almost too much to bear, and yet you realize that this group holds a special place within an essential compartment of your heart. You pick up and soldier on.

Tonight, that is what we must do.

I speak with "we" today, because the San Jose Sharks are comprised of professional athletes who know what they must do. Go into Edmonton and get a W. Nothing has changed for them from a hockey standpoint. As much as we want to think that they have spent the last forty eight hours consumed by this loss, that is not the case. Sure they may have an extra jump in their step at 6:30 tonight, come out and lay the body on early in order to make sure they’re engaged physically—but by the time the puck drops, Chicago is behind them. It flat out doesn’t matter. A loss is a loss no matter which way you cut it, and as long as the effort is there tonight and Sunday, it can be discarded along with every other game this season that has resulted in zero points. The scoreboard is just a representation of the effort that was expelled, and to say that tonight is a "must-win" ignores everything that has occurred during the course of this season. The only demons that have to be dealt with are the demons of our own.

That being said, boy was that effort ugly. As I noted on Twitter during the course of the bloodbath, it reminded me of the 6-0 drubbing last season to the Detroit Red Wings-- the anticipation of a big game between two of the best teams in the West, the hype surrounding the tilt... and then a loss so brilliantly grandiose you have no choice but to consider a career path as a violent criminal. Oh, and the subsequent bridge jumping afterwards. Can't forgo some good ol' bridge jumping. 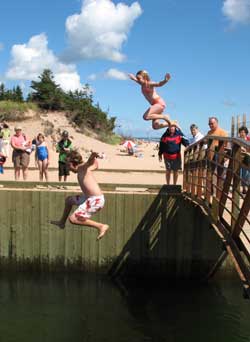 Any time you give up a shorthanded goal it is never a good sign, but three in a row is flat out atrocious. You can point to numerous plays throughout the course of the evening that symbolize wading through that 7 goal deficit river of shit such as Huskins' (lack of competent) decision making on the second goal, or the fact that Byfuglien was left unchecked in front of Nabokov during the fourth, but the hope is at the end of this week they can come out of it like Andy Dufresne.

A sadistically beautiful moment came midway through the third period. With the game clearly in the bag, Kate Longworth pops on the Jumbotron and extends an invitation to the (then) 6,000 in attendance to watch the "highlights" on CSN Bay Area after the game. The boos that cascaded down from the rafters trumped anything HP Pavilion has ever thrown at Chris Pronger.

I laughed. It was hilarious. Wrap that ten second moment in some drab paper, put a wilted bow on it, and send it to anyone who had the foresight to miss that game. It's all they need to see.

I also laughed when reading about the buildup surrounding Dany Heatley’s trip to Edmonton. This offseason was a trying time for all involved, and the fans in Edmonton have every right in the world to boo him unmercifully tonight. Ottawa too—the fact that he requested a trade and then denied an offer is, no matter if it was within his contractual rights, a visible stain on the mark of a player who had done this once before. But at some point we have to let it go. Move on. Dany Heatley is not washing his duds at Coin Laundry, nor is he grabbing post game refreshments at The Empress. Instead he's eating dinner at Santana Row before heading across the street to pick up some Christmas gifts for his family. That unfortunate situation is nowhere close to being bigger than the two points on the line tonight.

No amount of finger pointing and sore feelings are going to change that. Drop the self pity and pick up your stick.

In other news, Torrey Mitchell returns for the first time since the fall of the Berlin Wall-- safe money says he gets slotted on to the fourth line and sees about seven minutes of ice time. Be sure to check out our previous coverage of the ongoing saga for what we can logically expect out of him tonight, as well as the rest of this season. Also, keep an eye on Boyle-- he didn't look very good against Chicago, and while that may have a lot to do with the general play of the entire roster, the fact that he's playing injured may have a bit to do with it as well. Another below average outing from him where he doesn't look comfortable means you're going to be hearing this humble author calling for him to sit and get healthy. Just like the Pavelski situation from earlier this year, there's no need to rush him back right now.