The Month on Tap: November

Share All sharing options for: The Month on Tap: November

[Editor's Note]: I took a look at the season schedule during the offseason, establishing a power ranking of the months facing San Jose this year. Obviously these initial rankings will likely change throughout the season when various injuries and transactions occur, but it's a decent enough barometer of what we can expect to see in terms of competition.

It's time for the second edition of The Month on Tap, where we take a look at some upcoming games for the San Jose Sharks and review the month that was.

What Was Said Last Month

The End Result: 8-5-1. The blueline will go through some growing pains, and while the last change at home can mask that, the road game is a different story. Goal scoring keeps them in games for the majority of the month and the first line begins to click as they roll into November- by far the toughest month of the year.

- The Month On Tap: Octoberfest

Despite losing Joe Pavelski for nearly the entire month and playing without Devin Setoguchi during the last week, San Jose managed to post a 9-4-1 record during October. Previous concerns about Jason Demers and Kent Huskins have been quelled, as they have grown into a solid third pairing that has flourished in their sheltered minutes. Evgeni Nabokov has been stellar, Patrick Marleau is proving that throwing him under the bus means he's just going to knock down the windows and drive the thing, and the third line has been able to kick in the occasional goal while providing solid play in their own end.

Special teams have impressed, with the power play functioning at 25% and the penalty kill thwarting opposing teams at an 85% rate (both are currently holding down the sixth spot in the NHL). This is all the more impressive considering Pavelski has been out the entire month, with Joe Thornton picking up some notable shorthanded time to fill that looming void.

Does this come without caveats? Of course not. Vlasic and Blake haven't been impressive in their minutes against top competition, a concern going forward considering they are the quintessential shutdown pairing. Giving up the first goal has been an issue, as well as going to the box in the first period. Thomas Greiss has only gotten the starting nod once, a topic that has been extensively covered for what seems like eons. Ryane Clowe has notched all of one goal thus far, but the hope is that his shootout winner against the Los Angeles Kings last Wednesday can get him going-- maybe it already has, as he scored against the Colorado Avalanche on Friday.

However, it's hard not to be content with what the Sharks have done as a whole up to this point. But what can we reasonably expect to see in November? 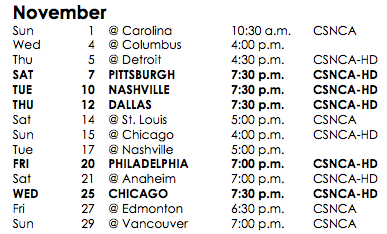 The Sharks continue to hit the road, playing nine of their fourteen games away from HP Pavilion. At the beginning of the season I labeled this the toughest month facing San Jose, but now I'm not so sure-- a lot of the teams that were expected to be tops in the Conference have struggled thus far, and the Sharks showed shades of 07-08 with their dominant road performances against the Philadelphia Flyers and Carolina Hurricanes (who, admittedly, have been in some real trouble this season).

Regardless, the loss of Pavelski and Setoguchi is going to hurt as San Jose continues to toil on the road, and the threat of hitting a metaphorical wall may come into play if Marleau slides off his torrid point scoring pace. David Pollak reported that both Pavelski and Setoguchi (along with Vesce and Mitchell) were unlikely for Columbus, and it seems as if Setoguchi is a little longer off than the rest of the crew considering he hasn't been skating. Not an issue at this stage of the season-- management has learned from last year's injury management and taken a methodical approach to bringing these guys back, a choice they should be commended for. As mentioned before, I would like to see Greiss see some more starts. There are three back to backs this month, and I fully expect McLellan to at least take advantage of those in order to get him some reps.

If San Jose remains in the Western Conference top five after November, the first two months of the season should be considered a resounding success.

The End Result: 7-5-2. The second straight month of a road heavy schedule and a depleted top six coming back from injury cause some issues for San Jose, but the Sharks manage to keep their head above water and stay amongst the top five in the Western Conference. Two straight months of minimal travel follow, and bring with them a big opportunity to rack up standings points.