Share All sharing options for: Sharks Gameday: Motoring Into The Motor City

Say all you want about Detroit's struggles thus far this season. Go on, go ahead and say it. The almighty Red Wings are no more. Pavel Datsyuk is "past his prime", Todd Bertuzzi's black mark has replaced the curse of Marian Hossa, Johan Franzen will never fully recover from a torn ACL, Chris Osgood is loading up on quarters to hit Bingo Halls across the country, and Nik Lidstrom is dragging Brian Rafalski to the Panhandle on off days to check out future living accomodations.

Go on, go ahead and say it. Just make sure you whisper it under your breath while mentioning about seventeen caveats along the way.

With a six game win streak it's easy to sit back on your couch, soda pop in hand, and say it doesn't really matter. Because honestly, in the grand scheme of things, it doesn't. Two points in The Joe won't make or break the Sharks season. It's the culmination of a mini road trip, the tail end of a back to back-- not exactly a throwaway, but with all things considered, not an essential game on the Western Conference scorecard. Bodies are banged up, legs are a little gassed. A home cooked meal awaits, and dammit Rosalie, I can almost taste it.

Fact of the matter is, tonight means more than that. The demons weaving amongst the rafters above. The cold, unforgiving sheet of ice below. The Red Army lining up eye to eye, wooden bayonets poised at the ready. Many have fallen here, torn limb from limb under piercing lights, casually thrown aside like the masses before them. And if history repeats itself? If history has provided a compass to navigate this treacherous terrain tonight?

Then history has damned our very souls.

Consume at your own discretion

Detroit is coming off a 2-0 shutout of the struggling Boston Bruins, their second win in a row. Mike Babcock has been letting some barbs at his players rip through the media in the past week, and it's safe to say that this won't be an ordinary game in the locker room of Detroit-- I wouldn't go as far as stating that they have something to prove considering their recent history, but it's definitely going to be a statement game to remind San Jose that The Joe is as unhospitable as ever. They've posted a noteworthy 4-1-1 record at home thus far, and a win tonight would put them in a tie for the Central Division lead.

for the real show tonight-- another Captaincy controversy! Rob Blake will likely be on the shelf with an always invigorating "upper body injury", and concurrently, someone will have a spiffy new letter on their jersey. Safe money says the C goes to Boyle, with Thornton and...uh oh. Could it be? Might it be? What a difficult decision to make, a conundrum of the highest order. 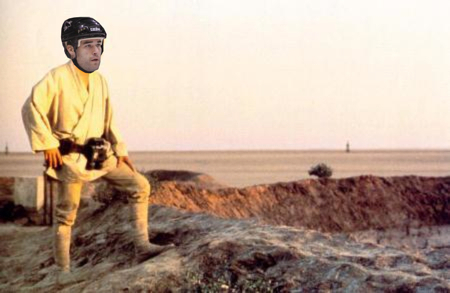 Difficult? It's easier than bulls-eying womp rats in Beggar's Canyon.

Prediction: Sharks win 1-0. The lone goal comes from Marleau, who sends a proton torpedo past Osgood in the waning seconds of the third. Message boards across the galaxy describe it as one in a million, and Ryan Vesce dances in his injury rehabilitation facility on Endor.