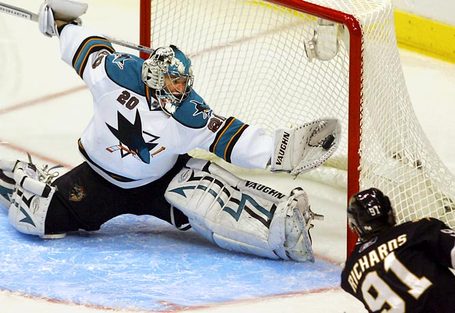 I always like hearing and reading Evgeni Nabokov's interviews. Growing up in Kazakhstan, he didn't get too many people pestering him with requests for interviews that would allow him to pick up all the cliches Canadian kids learn so early. Nabby never beats around the bush and is always honest with his answers. Below are the excerpts from the interview he recently gave to Sovetsky Sport (link) right after the Sharks game against Flyers, where he discusses how he felt during the uncertainty of the last summer, what he think it means he has to earn his starts, which stat is the most important to him, what he thinks is the biggest reason behind San Jose playoffs curse and which of the Sharks' chocking campaigns was the most painful to him. Hit the jump for more.

It's your 10th season with the team. There are only few other goaltenders as loyal as you, Martin Brodeur, Chris Osgood, Marty Turco..

While you're still playing, you really don't think about these things. I'm not sure it's even a compliment. I'll think about it when I retire. Right now I just want to focus on the game.

I asked you because there were plenty of rumors during the past off-season that San Jose could trade you. Would you have been shocked if they did?

It would not have surprised me. Anything is possible in the NHL. But again, I try not to think about these things.

Your coach said last summer that you have to earn your starts with the Sharks.

Everyone wrote about it.. But any coach would say this. Goaltender is such a position that when you're not doing well, you won't start. I worked with many coaches. They all told me I have to earn my starts.

Does it motivate you?

Not sure how to explain this. Perhaps goalies think differently? No one needs to motivate me, it comes from within. NHL is very competitive. You lose your touch for a bit, and someone takes over your job. Everyone for some reason took the coaches words with caution, looking for conflict. But how else can it be? If Nabokov doesn't play well, how can you start him? Because of the past? That just doesn't happen.

You recently played in your 500th game. What does that mean to you?

The most important thing about that stat is that out of 500 games, majority of these games were wins [out of 509 played as of today, Nabby won 260 of them, and earned an extra point in 58 more]. We track a lot of stats for goalies - SV%, GAA, etc.. I think the most important stat is wins. Some people would look and say, "How bad is this guy? He allowed three goals on 15 shots.." - but if we won 4:3, who cares? What's more important in hockey than winning?

San Jose is about to reclaim no. 1 spot in the NHL standings. What is wrong with the Sharks when playoffs arrive?

I once said, San Jose is great in 82 games marathon, but something happens when it's a seven game sprint. We have 20 people on our team. When someone stops scoring, others should help. So far it didn't work out. San Jose's front office is unhappy, and so are the players. We've had a good team in the past few years, but what happens in playoffs is a mystery. On the other hand, only one team wins the Stanley Cup. So it's not just San Jose that fails - 28 other teams do as well.

Sharks lost in the first round last year..

So what? Two years ago we passed the first round and then still lost to Dallas. And few years ago we lost to Calgary in the Conference finals. It doesn't matter which round you reach - if you don't win the Stanley Cup, you lose.

Maybe it's not so bad to lose in a conference final?

It's actually worse, trust me. When we lost to Calgary, it was a tragedy. We battled so hard, and could see Stanley Cup final within our reach, and then all of a sudden, it's was all over and vacation began - unbearable feeling.

Can your kids skate yet?

Not yet, but they love running around the house. Andryushka always runs with a stick in his hands. Emma doesn't care about hockey, her interest are dancing and gymnastics. It's fun to be at home. They never let dad get bored.